Liberal Comedian Lashes Out at Melania Trump Over Immigration Comments: 'F*** You' 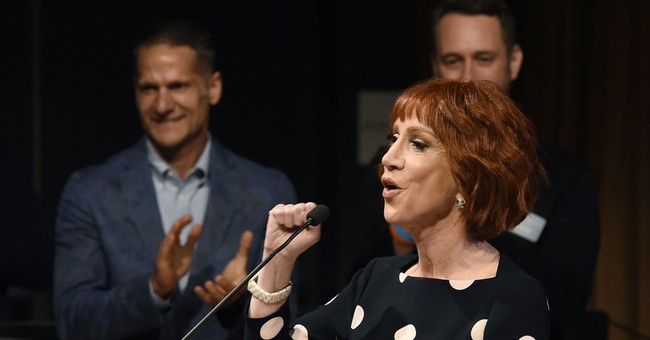 Kathy Griffin, the liberal comedian who notoriously posed with a fake severed head of Donald Trump last year, lashed out against first lady Melania Trump on Sunday over the Trump administration’s immigration policies.

“F--- you, Melanie,” the comedian tweeted. “You know damn well your husband can end this immediately...you feckless complicit piece of s---.”

Griffin was responding to a statement put out by the first lady’s spokeswoman on the issue of families being separated.

“Mrs. Trump hates to see children separated from their families & hopes both sides of the aisle can finally come together to achieve successful immigration reform,” her communications director, Stephanie Grisham, told multiple news outlets. “She believes we need to be a country that follows all laws, but also a country that governs with heart.”

Griffin was referring to the administration’s “zero tolerance” policy, which calls on law enforcement officials to press charges against illegal immigrants, leading to the separation of families. She also called the first lady Melanie in reference to a tweet made by the president last month in which he misspelled his wife's name.

Department of Homeland Security Secretary Kirstjen Nielsen argued Sunday that the media, activists, and some lawmakers are “misreporting” the immigration policy.

“We do not have a policy of separating families at the border. Period,” she said on Twitter.

“This misreporting by Members, press & advocacy groups must stop. It is irresponsible and unproductive. As I have said many times before, if you are seeking asylum for your family, there is no reason to break the law and illegally cross between ports of entry,” she added. “For those seeking asylum at ports of entry, we have continued the policy from previous Administrations and will only separate if the child is in danger, there is no custodial relationship between 'family' members, or if the adult has broken a law. DHS takes very seriously its duty to protect minors in our temporary custody from gangs, traffickers, criminals and abuse.”