Trump: I'll Walk Away From North Korea Talks If I Don't Think They'll Be 'Fruitful' 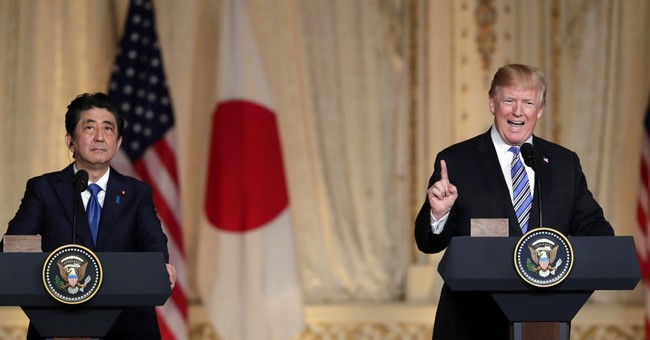 President Trump on Wednesday explained that he will walk out of a meeting with North Korean dictator Kim Jong Un if he doesn’t believe it will be “fruitful.”

The presidents comments come after it was reported that CIA Director Mike Pompeo met with Kim earlier this month to lay the groundwork for the upcoming talks between the two leaders.

“Mike Pompeo met with Kim Jong Un in North Korea last week. Meeting went very smoothly and a good relationship was formed. Details of Summit are being worked out now. Denuclearization will be a great thing for World, but also for North Korea!” Trump tweeted Wednesday.

Trump said during the joint news conference alongside Japanese Prime Minister Shinzo Abe that denuclearization will be discussed with Kim.

"We will not repeat the mistakes of previous administrations [and] our campaign of maximum pressure will continue until North Korea denuclearizes."

Abe sounded more cautious in his remarks about the meeting.

"Just because North Korea is responding to dialogue, there should be no reward,” he said. "Maximum pressure [on Pyongyang] should be maintained.”

Trump also said his administration is "fighting very diligently" to free three Americans held captive by North Korea, as well as Japanese citizens the regime has captured, which is "one of the truly most important things on Shinzo's mind," he said.