Chinese Ambassador Warns Trump Over Tariffs: 'We Will Retaliate' 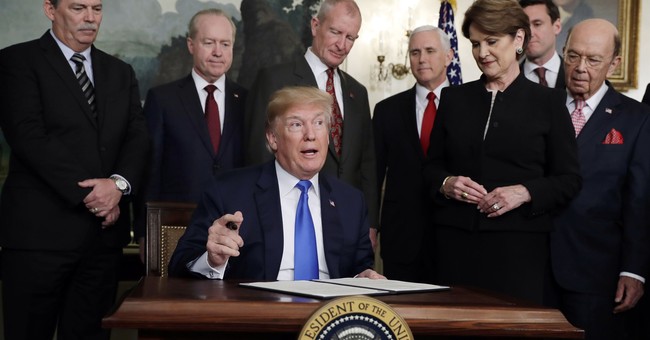 The Chinese ambassador to the United States said Thursday that China is “not afraid” of a trade war should President Trump follow through on his proposed tariffs.

"We don’t want a trade war with the United States, or with anybody else. But we are not afraid of it. If somebody tries to impose a trade war on us, we will fight,” Ambassador Cui Tiankai said in a video statement posted on the Chinese Embassy’s Facebook page.

The White House said it "will propose for public comment adding 25 percent additional tariffs on certain products that are supported by China’s unfair industrial policy" with "sectors subject to the proposed tariffs will include aerospace, information communication technology, and machinery."

"We're doing things for this country that should've been done for many, many years," the president said Thursday. "We have a tremendous intellectual property theft going on, which likewise is hundreds of billions of dollars and that's on a yearly basis."

Cui dismissed the accusations against China regarding intellectual property theft as "totally groundless" and said the country "will retaliate" if necessary.

“Let me assure those people who intend to fight a trade war: We will certainly fight back. We will retaliate,” he said. “If people want to play tough, we will play tough with them and see who will last longer.”