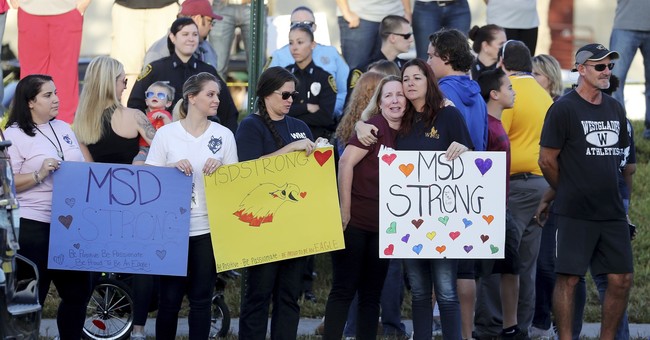 Students around the world will protest gun violence Wednesday in the National School Walkout, which will take place for at least 17 minutes at 10 a.m. in each time zone.

The walk was scheduled to take place one month after 17 students and staff were killed by a gunman at Marjory Stoneman Douglas High School in Parkland, Florida and has been organized by Women’s March Youth EMPOWER.

The group says the walkout is meant to “protest Congress’ inaction to do more than tweet thoughts and prayers in response to the gun violence plaguing our schools and neighborhoods.”

Women’s March Youth EMPOWER is calling for students, teachers, school administrators, parents and allies to take part in a #NationalSchoolWalkout for 17 minutes at 10am across every time zone on March 14, 2018 to protest Congress’ inaction to do more than tweet thoughts and prayers in response to the gun violence plaguing our schools and neighborhoods. We need action. Students and allies are organizing the national school walkout to demand Congress pass legislation to keep us safe from gun violence at our schools, on our streets and in our homes and places of worship.

Students and staff have the right to teach and learn in an environment free from the worry of being gunned down in their classrooms or on their way home from school.

Parents have the right to send their kids to school in the mornings and see them home alive at the end of the day.

We are not safe at school. We are not safe in our cities and towns. Congress must take meaningful action to keep us safe and pass federal gun reform legislation that address the public health crisis of gun violence. We want Congress to pay attention and take note: many of us will vote this November and many others will join in 2020.

More than 185,000 students are expected to participate, not just from schools around the U.S., but also in Ireland, Mexico, and Israel.

Another walk scheduled for March 24, “March for Our Lives,” will also protest gun violence.