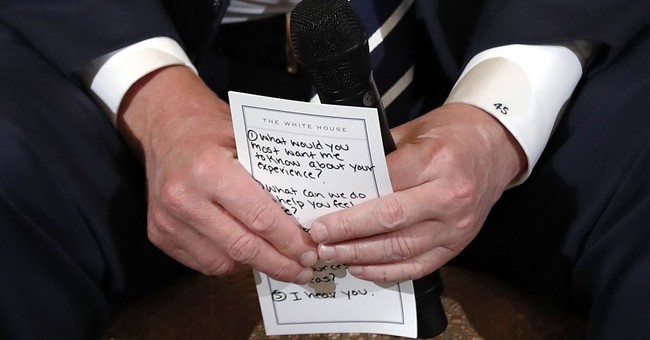 President Trump was criticized on social media Wednesday after photographs captured him holding a notecard with several bullet points, including one that said “I hear you,” during a listening session with survivors of the Florida high school shooting.

The notecard also said, “What would you most want me to know about your experience?” “What can we do to help you feel ___?”

Social media users were quick to go after the president for the notes, including some who questioned whether it was photoshopped.

1) Not his handwriting so not even his own notes
2) He needed notes to meet gun violence survivors
3) He needed to be reminded to say "I hear you" https://t.co/IsOXBqCWud

If someone has to teach you how to show empathy towards kids who have watched their friends be murdered, you are evil. https://t.co/lj3j3cTeuw

before all the photoshops come in on this let's take a moment to understand that @realDonaldTrump needs a written reminder to tell the survivors of a school shooting that he hears them. https://t.co/XJR6VmmX51

Trump promised students and families members at the listening session that his administration is going to take action to prevent future school shootings.

"We are going to be very strong on background checks, and put a very strong emphasis on the mental health of somebody," he said. "I want to listen. And then after I listen, we're going to get things done."