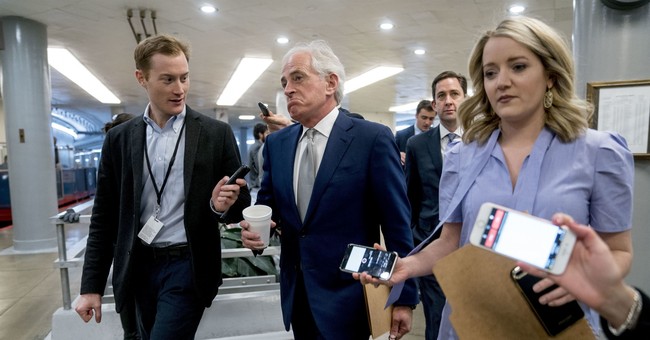 Sen. Bob Corker (R-Tenn.) is reportedly reconsidering his retirement from the Senate.

According to Politico, the Chairman of the Senate Foreign Relations Committee is “listening” to some of his Republican colleagues who are trying to convince him to stay over concerns about losing the seat to Democrats.

But now a faction of Republicans in Tennessee and Washington are worried that the favorite for the Republican Senate nomination, Rep. Marsha Blackburn (R-Tenn.), could lose the general election — and with it the Senate majority.

They want Corker to get back in to hold the seat and preserve waning foreign policy experience in the GOP. And there are signs that he is open to it, despite the steep climb a Republican primary might entail.

“While Corker is listening to the concerns that have been raised, he hasn’t made any commitments,” said the person close to Corker. Corker himself said on Monday he had no comment on the race.

An internal poll taken in late January shows former Democratic Gov. Phil Bredesen narrowly edging out Blackburn in a hypothetical match-up. With Republicans controlling just 51 seats, a loss in Tennessee and other competitive races could put the Senate in play — despite an electoral map tilted heavily in the GOP’s favor. (Politico)

Blackburn’s campaign spokeswoman said she is staying in the race regardless of Corker’s ultimate decision.

“It’s well past time for the good old boys’ club in Washington, D.C., to quit thinking they know who the best candidate and conservative leader is for Tennessee families,” said spokeswoman Andrea Bozek.

Corker, who has clashed multiple times with President Trump on Twitter, announced his retirement in September.

"We haven't had that conversation about Sen. Corker's plans. As always, I can't weigh in on the specifics of the potential of a race but I would have to talk to the president before making a comment," she said.