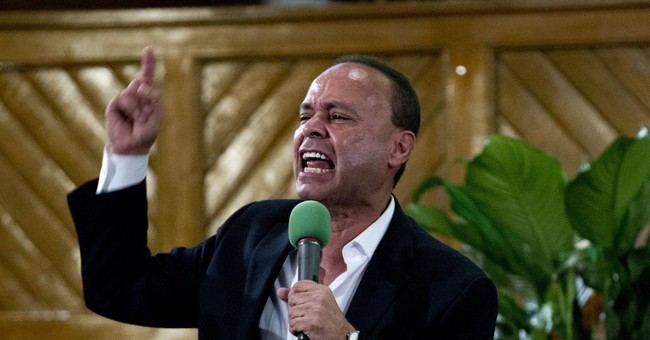 UPDATE: According to his spokesman, Gutierrez was not protesting the "USA" chant, but left early to make it on time to an interview.

Spox to Luis Gutierrez tells me that the congressman wasn't protesting when he left the chamber during "USA!" chants: "He was trying to make it to Univision. He watched the last 90 seconds on TV. It was not a protest or anything. He was just trying to get ahead of the crowd."

House Minority Leader Nancy Pelosi urged her Democratic colleagues to stay in the chamber Tuesday night during President Trump’s first State of the Union address, or don’t come at all, but one part of the president’s speech was just too much for Democratic Rep. Luis Gutierrez to bear.

The Illinois Democrat, who announced in November that he will be retiring after this term, stormed out when chants of “USA!” erupted among lawmakers after Trump’s discussed the Capitol being a monument to the American people.

“Monuments to Washington and Jefferson — to Lincoln and King. Memorials to the heroes of Yorktown and Saratoga — to young Americans who shed their blood on the shores of Normandy, and the fields beyond,” Trump said. “And others, who went down in the waters of the Pacific and the skies over Asia. And freedom stands tall over one more monument: this one. This Capitol. This living monument to the American people. A people whose heroes live not only in the past, but all around us — defending hope, pride, and the American way.”

Gutierrez was then captured on video walking out:

We have a bipartisan standing ovation — and a lot of "USA!" chants. https://t.co/00Kmhu7ges

"Even though I disagreed with almost everything he said, for Trump, the speech was clear and well-delivered. Whoever translated it for him from Russian did a good job," he said.

"I am still hopeful, but I don’t see this Congress and this President coming to an agreement that prevents the deportation of the Dreamers.

"The White House agenda is to gut legal immigration in exchange for allowing some of the Dreamers to live here. For those of us who support legal immigration, and that’s most Democrats and many Republicans, it won’t fly.

"And the Dreamers themselves have said they do not want legal status if it comes at the expense of others who will suffer more as part of the bargain. The speech did nothing to bring the pro- and anti-immigrant sides closer together.

"I was hoping for some sort of apology on Puerto Rico, but I heard nothing.

"If you look at how the President has treated Puerto Rico, you have to conclude that he just doesn’t care and probably thinks of Puerto Rico as just another s***hole country.

"I was born in 1953 in the U.S. when separate but equal was the law of the land. I am proud of the progress the United States has made as a nation on issues of race, gender, sexual orientation, disabilities, and many other areas where we have advanced.

"I was hoping to get through my life without having to witness an outwardly, explicitly racist American President, but my luck ran out."