Bannon, Lewandowski to Testify This Week 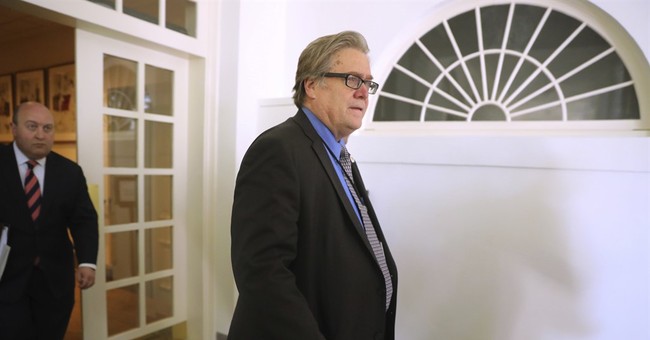 Bannon will be questioned by lawmakers behind closed doors Tuesday, including about information in Michael Wolff’s anti-Trump book “Fire and Fury: Inside the Trump White House,” which led to a feud with President Trump and his family and Bannon stepping down as executive chairman of Breitbart News.

“Even if you thought that was not treasonous, or unpatriotic, or bad s**t, and I happen to think it’s all of that, you should have called the FBI immediately,” Bannon said in the book.

Bannon also said Trump Jr. would “crack like an egg” in any possible public testimony about the situation.

rump Jr. fired back on Twitter, calling Bannon an “opportunist” who brought “a nightmare of backstabbing, harassing, leaking [and] lying” to the White House.

Bannon, who left his post at the White House in August, was a dominant figure in the novel -- which enraged the president enough to have his personal attorneys demand the publisher halt the book’s publication -- a request that was ultimately rejected. The lawyers also sent a “cease and desist” notice to Bannon, arguing he violated a non-disclosure agreement signed during the campaign by disclosing confidential information in speaking to the media about the campaign, and disparaging members of the Trump family. (Fox News)

Trump fired back at “sloppy Steve” Bannon, issuing a scathing statement saying he “has nothing to do with me or my presidency.”

“When he was fired, he not only lost his job, he lost his mind,” Trump said.

Lewandowski will also appear before the committee this week.

“I have nothing to hide. I didn’t collude or cooperate or coordinate with any Russian, Russian agency, Russian government or anybody else, to try and impact this election,” Lewandowski said on WABC’s “The Rita Cosby Show.” “I’ll be happy to come out and set the record straight about my lack of involvement with any type of foreign entity.”