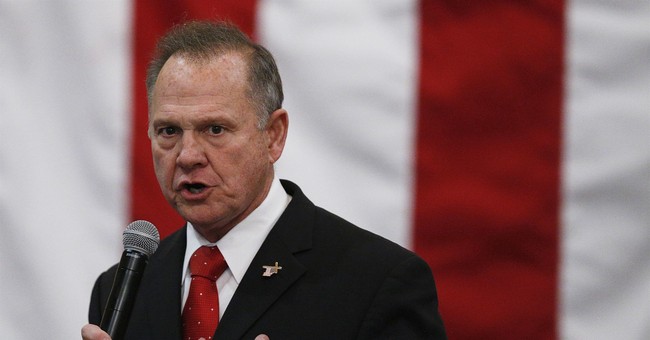 The Republican candidate never conceded the race to Democrat Doug Jones, who defeated him 49.9 percent to 48.4 percent.

Moore alleges voter fraud that was "sufficient to overturn the outcome of the election" occurred and is calling for an investigation.

"This is not a Republican or Democrat issue as election integrity should matter to everyone," Moore said in a statement his campaign released.

In addition to the filing, Moore also urged supporters to Moore call state officials, asking them to delay certifying the election results.

MONTGOMERY, Ala. - An election complaint was filed today on behalf of Roy S. Moore and Judge Roy Moore for U.S. Senate in the Circuit Court of Montgomery Alabama. The purpose of the complaint is to preserve evidence of potential election fraud and to postpone the certification of Alabama’s Special Election by Secretary of State John Merrill until a thorough investigation of potential election fraud, that improperly altered the outcome of this election, is conducted.

The election experts, who submitted affidavits in the complaint, agree that the irregularities in 20 precincts of Jefferson County alone are enough to reverse the outcome of the election. Richard Charnin, who holds three degrees in applied mathematics, and who has written four books on election fraud, calculates the probability of the election results in these precincts happening naturally is “less than one in 15 billion.”

Also provided in the complaint is an affidavit from Judge Roy Moore stating that he successfully completed a polygraph test confirming the representations of misconduct made against him during the campaign are completely false.

Moore stated, “It’s appalling that the Democrat Senate Majority PAC and the Republican Senate Leadership Fund both spent millions to run false and malicious ads against me in this campaign.”

“This is not a Republican or Democrat issue as election integrity should matter to everyone,” said Moore. “We call on Secretary of State Merrill to delay certification until there is a thorough investigation of what three independent election experts agree took place: election fraud sufficient to overturn the outcome of the election.”

Secretary of State John Merrill, along with Governor Kay Ivey and Attorney General Steve Marshall, will make their decision regarding certification tomorrow, December 28. The citizens of Alabama who care about voter integrity are encouraged to call them and ask for a delay in certification and a preservation of evidence until an investigation is conducted.

The move comes hours before that certification is to occur, with the state’s canvassing board set to meet Thursday afternoon. Alabama Secretary of State John Merrill told the Associated Press he will not postpone the meeting.

“It is not going to delay certification and Doug Jones will be certified (Thursday) at 1 p.m. and he will be sworn in by Vice President Pence on the third of January,” Merrill said.

Prominent Republicans have called all accepted the results of the election, with President Trump even saying Moore needs to concede.

“I would certainly say he should,” the president said when asked by reporters at the White House earlier this month.