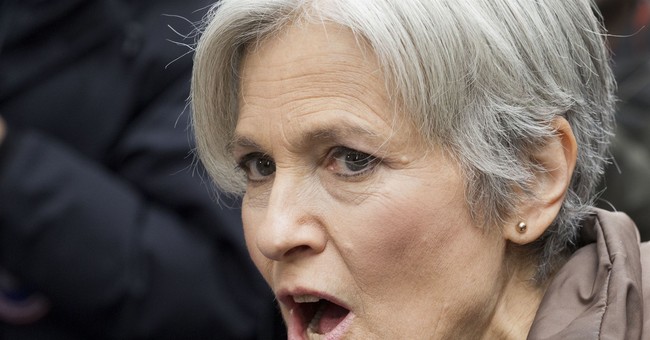 Former Green Party presidential nominee Jill Stein spoke out Thursday about why she’s the latest target in a congressional inquiry into Russia’s interference in the 2016 election.

Stein called the 2015 RT dinner she attended with Russian President Vladimir Putin in Moscow a “non-event” because there wasn’t even a translator at the table.

RT is a state-run news and propaganda channel.

"There was no translator at the table," Stein said on CNN’s “OutFront with Erin Burnett.” "Vladimir Putin came in very late, with three, four people that I thought were his bodyguards, turns out they were core people in his administration, but you never would have known that."

"There were no introductions, no conversations," she added. "Russians spoke Russian, I spoke to the only person in earshot who spoke English, who was a German diplomat that was sitting to my right. So it was really quite a non-event."

The most “significant” part of the dinner was shaking Putin’s hand, she explained.

“At one point, Putin made a very rapid turn around the table and shook everybody’s hand, but without any exchange of names, so that’s about as significant as this was," she said.

Stein said earlier this week that the Senate Intelligence Committee contacted her presidential campaign for documents to determine if there was a possible connection to Russia.

Later Thursday she told Fox News that she has “yet to see the proof" that Russia meddled in last year’s election.

"I think there are legitimate aims here in the investigation," Stein told Fox News' "Tucker Carlson Tonight." "Interference in our election is much bigger than the Russians and ... I would like to see the evidence of Russian culpability here."