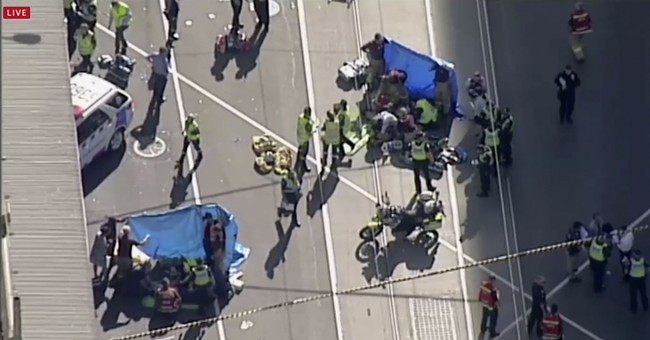 An Australian man of Afghan descent plowed a car into pedestrians at a busy intersection in the middle of Melbourne, Australia, Thursday.

The 32-year-old driver injured 18 people in the attack, several of whom are in critical condition, including a pre-school age child.

Acting chief commissioner of Victoria Police Shane Patton told reporters that the crash was considered to be deliberate but was not related to terrorism.

The streets outside Melbourne's iconic Flinders Street Station was busy with commuters and shoppers Thursday when witnesses said the SUV plowed into people crossing the street.

Witnesses told CNN affiliate Seven Network they saw people flung into the air after being hit by the car, which was barreling down the road at around 60 miles per hour (100 kph).

Police arrived on the scene within 15 seconds and the man was taken into custody by an off-duty police officer after attempting to resist arrest, Patton said. Both the man and the police officer were injured in the scuffle.

A 24-year-old man was also arrested at the scene, after he was seen filming the incident on his phone. Police found three knives in his bag. The man is being interviewed by police but Patton said at this stage, "we don't yet have any relationship established between the 24-year-old man and the driver... in fact, there may be no relationship between them." (CNN)

The driver was known to police because of “historical assault matters.” He also had a history of drug abuse.

“We understand he is on a mental health plan and receiving treatment for a mental illness," Patton said.