Tim Kaine Got This Major Fact Wrong on the Russian Dossier 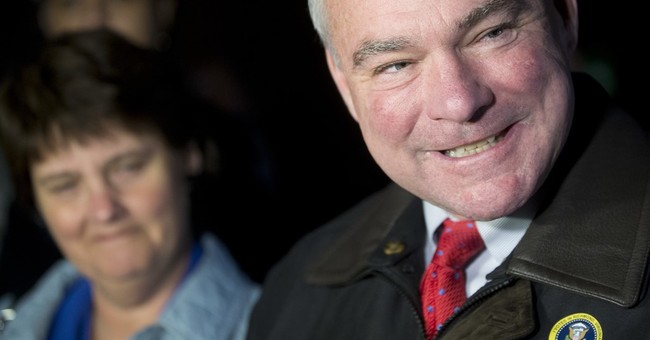 Sen. Tim Kaine got his facts wrong Tuesday while discussing on CNN who funded the Russian dossier.

The Virginia Democrat accused the Washington Free Beacon of funding the Russian dossier, but the conservative news outlet stopped paying the firm before they started working on the dossier.

It was the Democratic National Committee and the Clinton campaign that funded Fusion GPS for opposition research that led to the Russian dossier—a fact Kaine tried to bury by wrongly blaming the Free Beacon.

“Do you see these things as equivalent–of the Hillary campaign looking for dirt from Russians and Russians offering dirt to the Trump campaign?” CNN anchor Alisyn Camerota asked Kaine.

“If you’re asking about the dossier, that was funded by a conservative, online news publication–the Washington Free Beacon,” Kaine said. “And they hired a British secret service agent and then when they decided to drop it, apparently…some of the funds used to continue the investigation were paid for by the Clinton campaign.”

Again, the Free Beacon paid the firm for opposition research but stopped payment before Fusion GPS began working on the dossier—in other words, before the firm started working with a former British spy.

Current and past leaders of the DNC claim they knew nothing about the payments to fund the dossier. Hillary Clinton also played the ignorance card on both the funding of the dossier and its very existence before Buzzfeed published the document earlier this year.