Mattis: The Nuclear Threat From North Korea Is 'Accelerating' 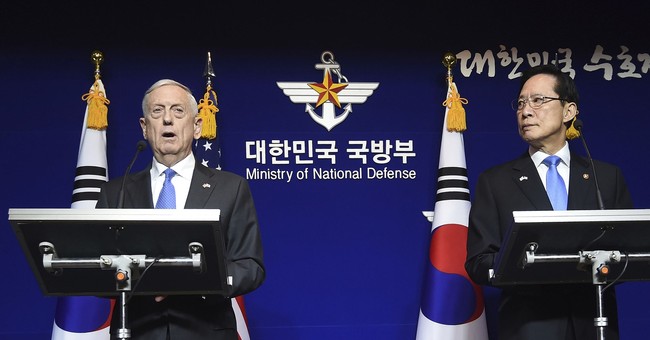 Defense Secretary Jim Mattis warned Sunday that the threat of a nuclear attack from North Korea is intensifying.

“North Korea has accelerated the threat that it poses to its neighbors and the world through its illegal and unnecessary missile and nuclear weapons programs,” he said.

“I cannot imagine a condition under which the United States would accept North Korea as a nuclear power,” he added.

Should North Korea attack, Mattis said the U.S. would defeat the hermit kingdom give our military superiority and alliance with South Korea.

“Make no mistake — any attack on the United States or our allies will be defeated, and any use of nuclear weapons by the North will be met with a massive military response that is effective and overwhelming," he continued.

Trump has bolstered his own rhetoric against the isolated nation. In August, Trump warned the North not to make any more threats against the United States, and said that if it did, it would be met with "fire and fury like the world has never seen."

This was Mattis's second visit to South Korea since taking office in January. He made a point of going to Seoul and Tokyo on his first overseas trip in February, saying he wanted to emphasis the importance he places on strengthening alliances and partnerships.

On Friday he visited the Demilitarized Zone that forms an official buffer between the two Koreas. He appeared there with Song in what they both called a show of solidarity. (Fox News)

Last week President Trump hinted at possibly making his own trip to the Demilitarzied Zone.

“Well, I'd rather not say, but you'll be surprised,” he said Wednesday at the White House.

Share this on Facebook
Tweet
Firearms Reporter Brings Clarity to the 'Why Can We Shoot People in the Legs' Debate
Matt Vespa
'What's the Incentive?': NBC Host Asks CDC Director When Vaccinated Americans Can Take Off Their Masks
Spencer Brown