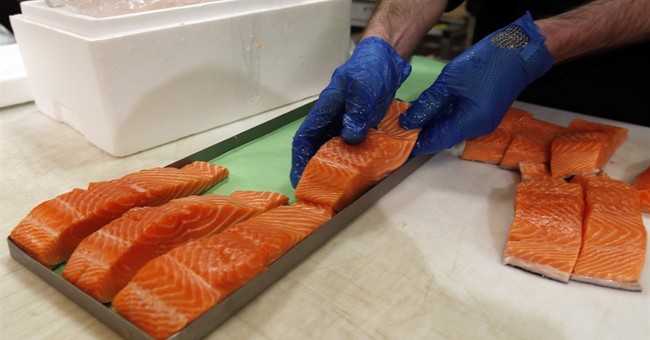 Without even realizing it, Americans who purchased salmon from two major U.S. supermarkets may have subsidized North Korea’s nuclear weapons program.

According to an Associated Press investigation, North Korea workers, who are outsourced by dictator Kim Jong Un’s regime to work in Chinese factories, help process seafood that ends up in U.S. stores, including Walmart and ALDI.

The workers, 70 percent of whose salary is taken by North Korea’s government, are essentially enslaved—they sleep on “metal bunk beds in fluorescent-lit Chinese dormitories,” they must travel to the factory in pairs or groups, they have zero privacy, are not allowed to leave the compounds without permission, and have no access to phones or email.

At a time when North Korea faces sanctions on many exports, the government is sending tens of thousands of workers worldwide, bringing in revenue estimated at anywhere from $200 million to $500 million a year. That could account for a sizable portion of North Korea’s nuclear weapons and missile programs, which South Korea says have cost more than $1 billion.

While the presence of North Korean workers overseas has been documented, the AP investigation reveals for the first time that some products they make go to the United States, which is now a federal crime. AP also tracked the products made by North Korean workers to Canada, Germany and elsewhere in the European Union.

Besides seafood, AP found North Korean laborers making wood flooring and sewing garments in factories in Hunchun. Those industries also export to the U.S. from Hunchun, but AP did not track specific shipments except for seafood.

American companies are not allowed to import products made by North Korean workers anywhere in the world, under a law signed by President Donald Trump in early August. Importers or company officials could face criminal charges for using North Korean workers or materially benefiting from their work, according to the law. (AP)

The AP reached out to the Western companies involved, and each one agreed they would not tolerate modern day slavery and the potential support of Kim Jong Un’s oppressive regime in their supply chains. Many pledged to investigate, others said they already cut ties with some suppliers.

John Connelly, president of the largest seafood trade association in the U.S., said the National Fisheries Institute was strongly encouraging all of its companies to investigate their supply chains “to ensure that wages to the workers, and are not siphoned off to support a dangerous dictator.”

“While we understand that hiring North Korean workers may be legal in China,” he said, “we are deeply concerned that any seafood companies could be inadvertently propping up the despotic regime.”