WATCH: Here's 34 Examples of Trump-bashing at the Emmys 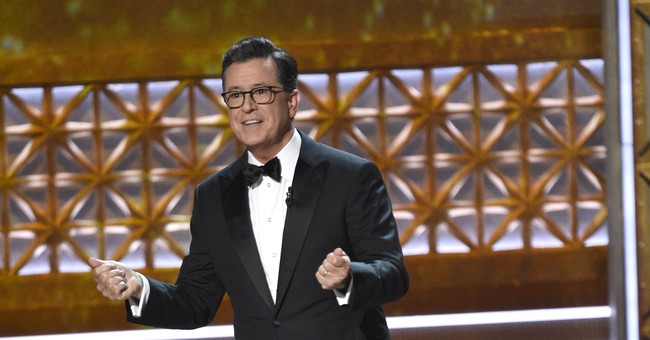 Even if you didn’t watch the Emmys on Sunday you have probably heard by now that it devolved into an anti-President Trump awards show. The ratings this year tanked, shrinking to an all-time low and many are attributing it to the Trump-bashing. Only 11.38 million people watched.

In sum, host Stephen Colbert was fixated on bashing Trump, but others, including Alec Baldwin, Tatiana Maslany, Julia Louis-Dreyfus, and comedian Kumail Nanjani were among some of the others to join in.

The last four minutes of Colbert's opening monologue contained a flurry of Trump jokes, including poking fun at his television watching habits, how he lost the popular vote to Hillary Clinton, and, most memorably, setting up Sean Spicer's self-deprecating cameo to declare the Emmy audience the largest ever.

Award winner and Trump impersonator Alec Baldwin said, "At long last, Mr. President, here is your Emmy," referring to Trump's desire to have won one for "The Apprentice."

"We did have a whole storyline about an impeachment, but we abandoned that because we were worried that someone else might get to it first," actress Julia Louis-Dreyfus said upon winning her sixth Emmy for "Veep."

"They also celebrate people who frantically race across international borders and those who can scale walls really, really quickly. In other words, the president's worst nightmare," he said.  (WFB)

As Dan Gainor, the Media Research Center’s vice president said, Hollywood is never going to walk away from politics.

“The left wants to force politics into every single aspect of our lives -- from sports to movies to the food we eat. They won’t be satisfied until we are all appropriately woke to their struggles du jour,” he told Fox News.