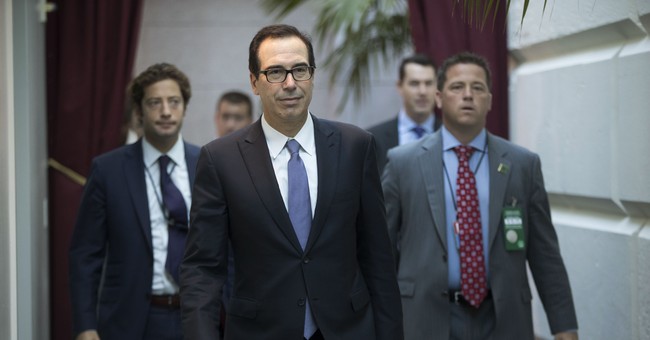 President Trump has repeatedly called for bringing the corporate tax rate down from its current 35 percent to 15 percent, but on Tuesday, Treasury Secretary Steve Mnuchin acknowledged that may not be possible.

“I don’t know if we’ll be able to achieve that, given the budget issues, but we’re going to get this down to a very competitive level,” he said at an event hosted by CNBC.

Mnuchin did not give an exact number but rather emphasized that getting tax reform done is much more important.

“What the exact number is less important,” he said, adding, “what's more important is making sure we have a competitive system."

House Speaker Paul Ryan made similar remarks last week when discussing tax reform and said “the numbers are hard” to achieve a 15 percent rate. Instead, Ryan said a number in the low-to-mid 20s is more realistic.

Republicans across the board want to lower the corporate rate, which is currently 35 percent, as part of tax reform. But if Republicans want to pass a tax bill through reconciliation to prevent a Democratic filibuster, the legislation can't add to the deficit outside the budget window.

Mnuchin said on Tuesday that he hopes tax-reform legislation is bipartisan, but that Republicans are prepared to use reconciliation if a bill won't be able to get the 60 votes in the Senate needed to overcome a filibuster.

"This is the most important issue for the American economy," he said.

Most Senate Democrats have said they won't support a tax bill that cuts taxes for people in the top 1 percent of income.

Mnuchin said that Republicans plan to eliminate the state and local tax deduction, so there won't be a tax cut for people in high-tax states such as New York and California. He hopes to lower the top individual tax rate slightly to offset the elimination of the deduction so that residents of high-tax states don't see a tax increase. (The Hill)

Mnuchin also said he’s considering backdating any tax changes to the beginning of the year, which “would be a big boon for the economy.”