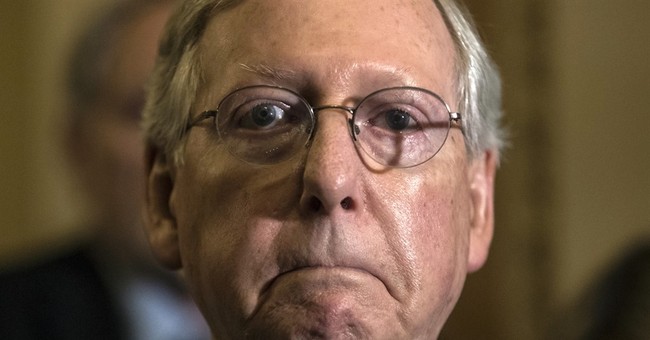 According to a new Public Policy Polling survey, only 18 percent of residents approve of the job he’s doing, while 74 percent disapprove.

While McConnell won’t face re-election until 2020, if he were hypothetically on the ballot today, 37 percent of respondents said they’d vote for him, compared to 44 percent who said they would vote for a Democratic opponent instead. Nineteen percent were undecided.

McConnell, who was unable to get enough Senate votes to ensure passage of an Obamacare repeal bill, has recently vented his frustrations with the president over his “excessive expectations” for the GOP agenda.

“Now our new president has of course not been in this line of work before. And I think had excessive expectations about how quickly things happen in the democratic process,” McConnell said.

The poll did find, however, that nearly half of respondents—49 percent—disapproved of the healthcare legislation anyway. Twenty-seven percent said they approved of it.

Nevertheless, Trump has been critical of McConnell for failing to repeal and replace Obamacare, and even told him to “get back to work” on advancing the Republican agenda, including on healthcare, tax reform, and infrastructure.

"Mitch, get back to work and put Repeal & Replace, Tax Reform & Cuts and a great Infrastructure Bill on my desk for signing. You can do it!" the president tweeted.

Trump even suggested if he failed to do so he ought to step down.

But in the fight between Trump and McConnell, a majority of Republican voters have the president’s back—not the Senate majority leader’s.

And in Kentucky, specifically, the survey found the president has a 60 percent approval rating, with 36 percent of respondents disapproving.