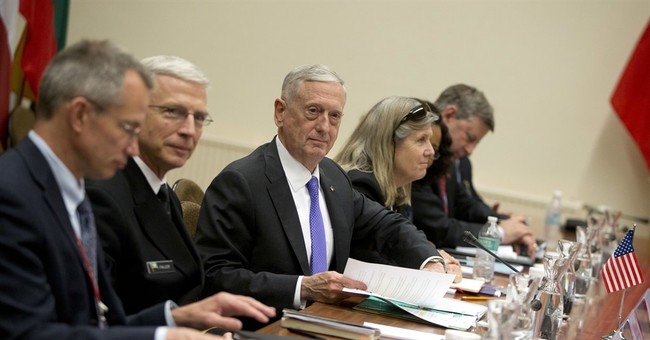 A high school student nabbed an exclusive interview with Secretary of Defense Jim Mattis when his cell phone number was inadvertently exposed in a photograph of President Trump and bodyguard Keith Schiller.

Schiller was holding a stack of papers and on the top was a sticky note that had written on it ‘Jim, Mad Dog, Mattis’ and his phone number. The photo ran on a Washington Post story from May.

While the paper quickly removed the image, it wasn’t quick enough for Teddy Fischer, a sophomore at Mercer Island High School, who decided to call Mattis with an interview request.

“I called it to see if it was him, because I was pretty curious if this is actually his number or is it kind of a joke,'” he told the King 5, a local news channel in Washington state.

Instead of leaving a voicemail, Fischer followed up with a text message.

Mattis agreed, granting the student a 45-minute interview about politics and history. He said he agreed to do the interview in part because he too hails from Washington state. But also because he feels a need to pass knowledge on to younger generations.

“I've always tried to help students because I think we owe it to you young folks to pass on what we learned going down the road so that you can make your own mistakes, not the same ones we made,” Mattis said.

When asked what advice he’d give to teenagers who are worried about the future of our country and about what is seen on the news, Mattis said it’s important to “get involved.”

“You’ll gain courage when you get involved,” he told Fischer. “You’ll gain confidence, you’ll link with people, some of whom will agree with you and some won’t, and as a result, you’ll broaden your perspective. If you do that, especially if you study history, you realize that our country has been through worse and here’s how they’ve found their way through that.”

A transcript of the entire interview can be found on The Islander.