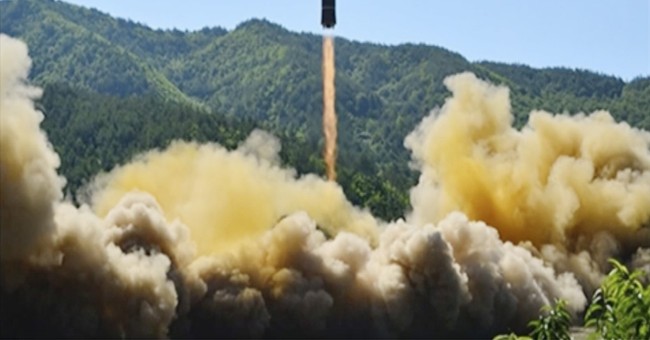 North Korea on Tuesday launched an intercontinental ballistic missile that surpassed any of the rogue nation’s previous tests in terms of flight time and height.

“The test launch was conducted at the sharpest angle possible and did not have any negative effect on neighboring countries," North Korea's state media said in a statement.

The missile traveled 580 miles for 37 minutes and reached an altitude of 1,500 miles. Missile experts warn Alaska could be within striking distance.

Kim Dong-yub, a military expert at Kyungnam University's Institute of Far Eastern Studies in Seoul, confirmed the test’s success and said “if launched on a standard angle, the missile could have a range of more than 8,000 km,” Reuters reports.

David Wright, co-director of the Global Security Program at the Union of Concerned Scientists, also said that the test, if launched on a standard trajectory, “would allow it to reach all of Alaska.”

The lower 48 states and Hawaii are still out of range, he said.

Other experts shared those assessments.

Vice Adm. James Syring, the director of the Missile Defense Agency, previously said, if it didn't already exist, it would only be a matter of time until North Korea was able to attack the U.S.

"We have to assume that the capability exists today to attack the United States," Syring said.

If the U.S. decides the threat posed by North Korea is too great, the nation has options.

For the first time since the 1990s, the Pentagon ordered two U.S. aircraft carrier strike groups to be positioned off the Korean Peninsula last month. (Fox News)

According to former Defense Secretary Leon Panetta, the U.S. has other means of confronting Pyongyang.

"We do have covert capabilities, and I think it would be wise for the United States to use those covert capabilities as a way to continue to undermine the North Korean government," Panetta said. "If they do anything stupid, it could end their regime, period."

President Trump condemned the missile test on Twitter, wondering if Kim Jong Un has “anything better to do with his life.”

"Hard to believe South Korea and Japan will put up with this much longer. Perhaps China will put a heavy move on North Korea and end this nonsense once and for all!"