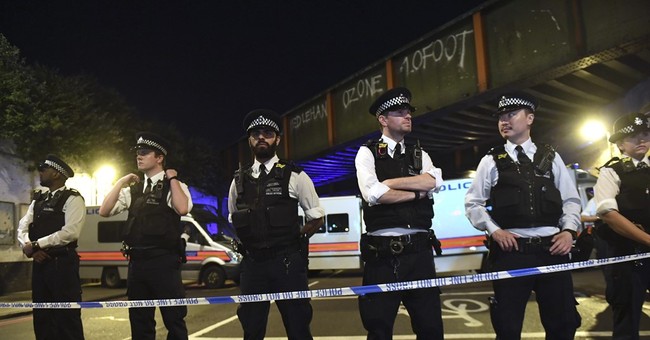 The 48-year-old man who allegedly plowed a van into a crowd of worshippers at a London mosque as they were leaving Ramadan prayers was seen blowing a kiss to onlookers as he was taken away, FoxNews.com reports.

At least one person was killed and 10 others were injured in the incident, which London Mayor Sadiq Khan called a “horrific terrorist attack.”

Muslim leaders say the assault was “motivated by Islamophobia." According to eyewitnesses, the terrorist, who appeared to be Caucasian, said "I'm going to kill all Muslims - I did my bit" after the attack.

"During the night, ordinary British citizens were set upon while they were going about their lives, completing their night worship," said Harun Khan, a leader of the Muslim Council of Britain. "It appears from eyewitness accounts that the perpetrator was motivated by Islamophobia."

Police said eight of the injured were taken to three hospitals and two suffered minor injuries and were treated at the scene.

Witnesses reported seeing at least one person receiving chest compressions. Police said that person was the lone death in the incident, but it was unclear if it was the van that caused the death.

Prime Minister Theresa May described the attack as a "sickening" attempt to destroy liberties that unite Britain, such as freedom of worship. She added that the man acted alone. May said earlier she would chair an emergency security Cabinet session later Monday and that her thoughts were with the injured, their loved ones and emergency officials who responded to the incident.

Jeremy Corbyn, leader of the Labour Party, said he was “shocked” by the “horrific and cruel attack.”

“A terrorist attack on any faith or community is an attack on all of us,” he tweeted. “We must and will stand united against those who seek to divide us.”