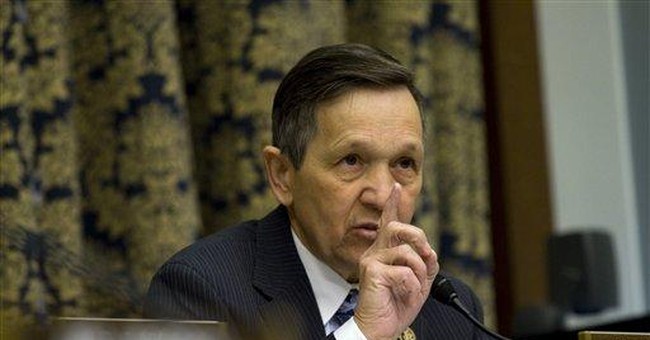 "You have politicization of agencies that is resulting in leaks from anonymous, unknown people and the intention is to take down a president," the former Ohio congressman told Fox News’ Sean Hannity. "Now, this is very dangerous to America. It's a threat to our republic, it constitutes a clear and present danger to our way of life. So we have to be asking, what is the motive of these people? Who's putting these leaks out? Why doesn't somebody come forward and make a charge and put their name and reputation behind it, instead of attacking through the media and not substantiating their position?"

Hannity noted it’s a real danger to have members in the intelligence community spying on an opposition party candidate and transition team under the guise of national security “at a 600 percent increase rate from the years prior to the election season.”

"Our first allegiance is to our country," Kucinich responded. "This isn't about one president, this is about the political process of the United States of America being under attack by intelligence agencies and individuals in those agencies, yes, as you said there might be good people in there, but there are certain individuals who are lifers who want to be able to direct the policy of the country. And if the president stands in their way whether it's a Democrat or Republican they'll just try to run that person out."

"Let me just repeat what you said, you're saying President Trump is under attack by the deep state intelligence community. Fair statement?" Hannity asked.

"I believe that," Kucinich responded. "Not only that, Sean, it has to be pointed out in October of 2016, that same deep state overrode the decision of President Obama and Secretary Kerry, to come to an agreement with Russia to a ceasefire in Syria. They overrode it and launched an attack against a Syrian military base. So, this is a problem in our country. We've got to protect our nation here. People have to be aware of what's going on. We've got to stand up for America, this isn't about Democrat, Republican. This is about getting what's going on in the moment and understanding that our country itself is under attack from within."