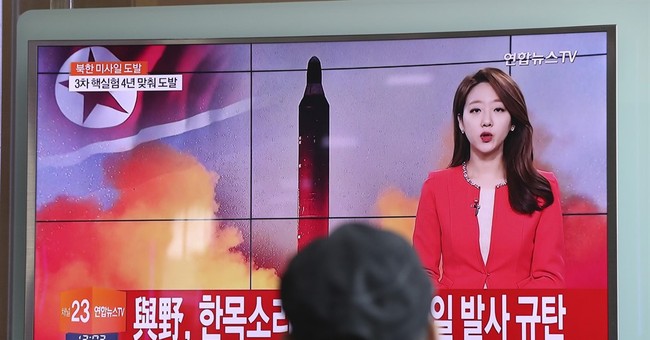 President Trump made introductory remarks during the secret, hour-long session for the senators. Updates on the situation were also provided by Secretary of State Rex Tillerson, Secretary of Defense Jim Mattis, Chairman of the Joint Chiefs of Staff Gen. Joseph Dunford and Director of National Intelligence Dan Coats.

The Trump administration will first increase pressure on the rogue nation through economic sanctions and by pursuing diplomatic measures.

"The United States seeks stability and the peaceful denuclearization of the Korean peninsula. We remain open to negotiations towards that goal. However, we remain prepared to defend ourselves and our allies," Mattis, Tillerson, and Coats said in a joint statement after the briefing.

Past efforts, they noted, have failed.

“With each provocation, North Korea jeopardizes stability in Northeast Asia and poses a growing threat to our allies and the U.S. homeland," they said.

Barrasso and Coons favored ramping up sanctions, including on China, with the latter telling MSNBC that the administration is working on “making it clear to China how serious we are about preventing North Korea from developing the capability to deliver a nuclear warhead by ICBM against the United States or one of our key allies, and that there are real efforts being made to avoid a misunderstanding or miscalculation because I do think this is a very dangerous circumstance and situation."

The meeting came the same day the U.S. test fired a long-range nuclear missile from Vandenberg Air Force Base in California. The Air Force Strike Command called the test “an important demonstration of our nation’s nuclear deterrent capability.”

Tillerson, Mattis, and Coats said the U.S. is reaching out to “responsible members of the international community to increase pressure on the DPRK in order to convince the regime to de-escalate and return to the path of dialogue.”

"We will maintain our close coordination and cooperation with our allies, especially the Republic of Korea and Japan, as we work together to preserve stability and prosperity in the region," they added.