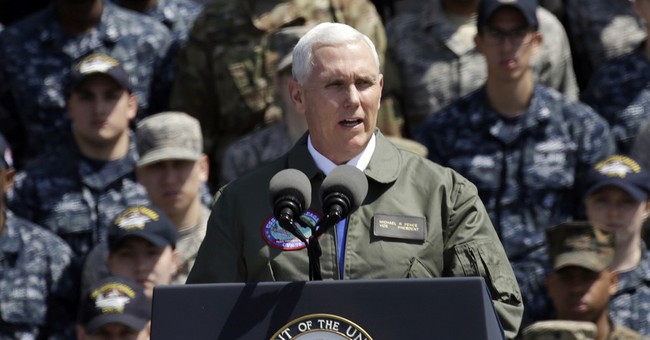 Vice President Mike Pence warned North Korea Wednesday not to test the United States and that the U.S. military stands ready to respond to the use of any weapons by the rogue regime.

"The United States of America will always seek peace but under President Trump, the shield stands guard and the sword stands ready," Pence said aboard the USS Ronald Reagan Wednesday.

"Those who would challenge our resolve or readiness should know, we will defeat any attack and meet any use of conventional or nuclear weapons with an overwhelming and effective American response," he told the 2,500 sailors aboard.

The vice president said the U.S. would honor its alliance with Pacific Rim nations and protect freedom of navigation in the South China Sea, the sea lanes vital to global shipping where China has been staking claim to disputed territory.

From two continents, Pence and Defense Secretary Jim Mattis warned that North Korea's latest failed missile launch was a reckless act of provocation and assured allies in Asia that the U.S. was ready to work to achieve a peaceful denuclearization of the Korean Peninsula.

Mattis denounced North Korea's attempted missile launch as he began a Middle East tour, telling reporters traveling with him to Saudi Arabia, "the leader of North Korea again recklessly tried to provoke something by launching a missile," he said. The term "reckless" is one the North Koreans have used to describe ongoing large-scale U.S. and South Korean military exercises, which the North calls a dress rehearsal for an invasion.

Pence’s warning comes as North Korea vowed to launch missile tests “on a weekly, monthly and yearly basis,” promising “all-out war” if the U.S. took any action against the regime.

The vice president in turn said “all options are on the table” and that “history will attest the soldier does not bear the sword in vain.”

Watch his remarks below around the 42:50 mark.