Haley: US Ready to Help Bring Syrian Conflict 'To An End' 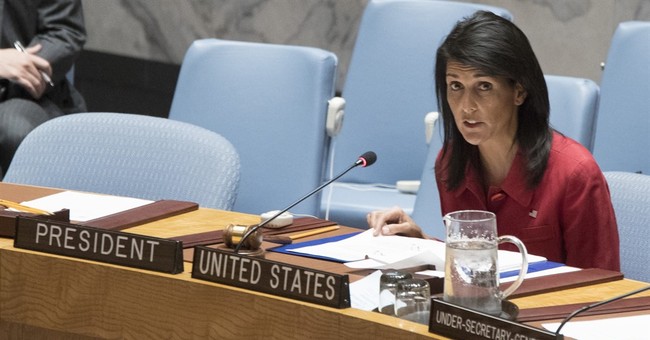 U.S. Ambassador to the United Nations Nikki Haley said Wednesday that Washington was ready to bring the Syrian conflict “to an end” through a diplomatic solution.

"For our part, the United States will continue to use influence over any party to push for peace," she said during remarks at the U.N.

She also defended President Trump’s decision to launch a missile strike against a Syrian airfield over the government’s decision to gas its own people.

"The United States was compelled to act. We will not allow the use of chemical weapons to go unanswered."

Haley also slammed Russia over its support of Assad.

"To my colleagues from Russia, you are isolating yourselves from the international community every time one of Assad's planes drops another barrel bomb on civilians and every time Assad tries to starve another community to death," she said.

"It is long past time for Russia to stop covering for Assad," she continued.

"We need to see Russia choose to side with the civilized world over an Assad government that brutally terrorizes its own people."