Mulvaney: This Is a 'Hard-power Budget' 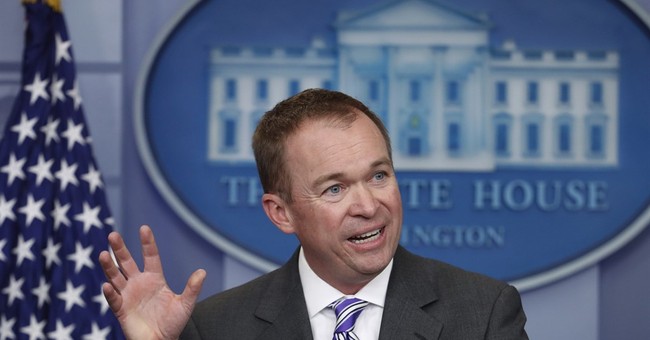 White House Budget Director Mick Mulvaney promised an “America-first budget” and that’s what was delivered in the proposal released Thursday.

Mulvaney said administration officials asked themselves a simple question when drafting the budget proposal: Is it something we can ask taxpayers to foot the bill for?

“When you start looking at places that we reduce spending, one of the questions we asked was, 'can we really continue to ask a coal miner in West Virginia or a single mom in Detroit to pay for these programs?' The answer was no,” Mulvaney said Thursday morning on MSNBC’s “Morning Joe.” “We can ask them to pay for defense, and we will, but we can’t ask them to continue to pay for the Corporation for Public Broadcasting.”

Indeed, the budget will give an additional $54 billion to defense spending, which will be accomplished in part by cutting funding to other departments, such as a 21 percent budget cut to the departments of Labor and Agriculture, 28 percent at State Department, 31 percent at the EPA, 14 percent on the Coast Guard, and 11 percent at FEMA. Federal funding for the Corporation for Public Broadcasting would be completely cut.

With such drastic cuts to the State Department, the “Morning Joe” hosts wondered how it would affect the military and its all it does throughout the world.

“Make no mistake about it, this is a hard-power budget, not a soft-power budget. That is what the president wanted and that’s what we gave him,” Mulvaney replied.

And regarding cuts to educational programs, Mulvaney said their effectiveness has determined the size of the cuts.

“A lot of those programs that we target, they sound great, don't they? They always do. We don't put a bad name on a program. Programs are always wonderful. It’s always small business or whatever. They don't work. A lot of them simply don't work,” he said. “I can't justify them to the folks who are paying the taxes. I can't go to the autoworker in Ohio and say ‘please give me some of your money so that I can do this program over here, someplace else, that really isn't helping anybody. I can ask them to help pay for defense. But I can’t do it anymore. I can’t go to them and say ‘I need your money to go help this program.’”