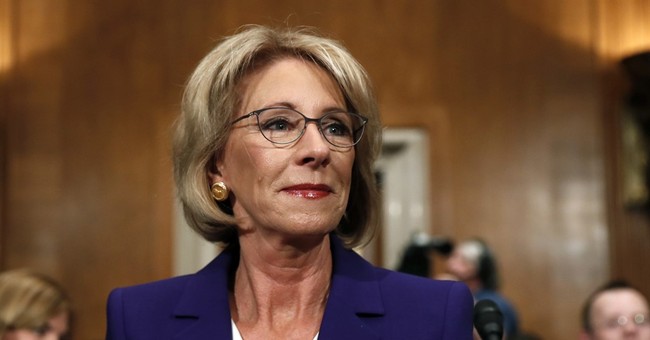 Betsy DeVos, President Trump’s nominee to head the Education Department, is one step closer to her expected confirmation.

In an unusually early vote Friday morning to end debate, senators advanced her nomination by a simple majority vote, 52-48, with every Democrat voting against the Michigan billionaire.

Senate rules require an extra 30 hours of debate before senators can confirm DeVos. If Democrats refuse to yield back time and drag out the procedural clock, they could push a final vote until Tuesday.

Since two Republican senators have said they’ll vote against her—Sens. Susan Collins (Maine) and Lisa Murkowski (Alaska)—Vice President Mike Pence will likely have to break the 50-50 tie, thus making history for being the first vice president to cast the deciding vote for a cabinet nomination.

Democrats have been pushing back hard against DeVos to lead the Education Department.

"When you judge her in three areas — conflicts of interest, basic confidence and ideology, views on Education policy, it is clear that Betsy DeVos is unfit for the job of Education secretary," Minority Leader Chuck Schumer said. "In all three areas ... she ranks among the lowest of any cabinet nominee I have ever seen."

“I expect her to be confirmed,” Sen.John Cornyn told reporters. “You can take that to the bank.”