Great: Syrians, Palestinians Buying Fake Honduran Identities to Get Into US 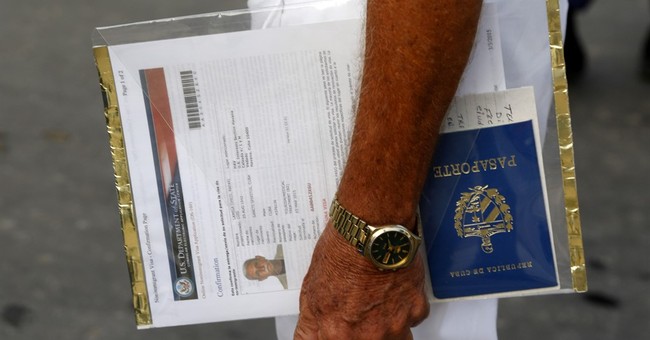 It’s not just the U.S.’s porous borders with Mexico Americans have to worry about, it’s also corrupt immigration officials in other countries that should be a major cause for concern.

According to a new report from Honduran newspaper La Prensa, officials in the country are being paid off to register foreigners as legal residents, which gives them access to documents that can then be used to enter the United States and other western nations.

The Center for Immigration Studies reports (emphasis mine):

Honduras' National Registry of Persons (RNP)confirmedthat hundreds of Palestinian, Syrian, and citizens of other Arab nations were fraudulently registered as Honduran citizens. As a result, these foreigners can then acquire Honduran passports, which can be used to apply for visas to enter to the United States.

On Sunday, La Prensa, a Honduran newspaper, revealed the illicit sales of Honduran identity documents to Palestinian and Syrian citizens. La Prensa's investigation was anchored on the case of a Palestinian, Kareen Samer Abdulhadi.

In October 2014, Abdulhadi presented himself to the Honduran consulate in Barcelona and with official documentation from the RNP and solicited a Honduran passport—arguing his status of "Honduran by birth." Nevertheless, the language, his marked Arab features, and inconsistent birth data aroused the suspicions of the diplomatic staff about his true nationality and the legitimacy of the documents (including a birth certificate and identification card). Further investigation by consular staff revealed that in 2013 there had been an unauthorized intrusion and alteration in the database of birth registrations of one of the municipal records back in Honduras, which allowed the Palestinian to be documented as Honduran.

According to information accessed byLa Prensa, Kareen Samer's father acquired his own Honduran identity card and birth certificate, and with those documents was able to also register at least eight family members, including his children, wife, and grandchildren.

Subsequent investigations established that Abdulhadi's case is only the tip of the iceberg of an organized crime network with international ties to smugglers and RNP officials, who were able to illegally register at least one hundred Palestinians and Syrians with fraudulent documentation.

According to an unnamed source in La Prensa’s report, the U.S. Embassy did detect at least some of the Palestinians and Syrians who were fraudulently registered as Honduran citizens and tried to obtain a visa.

But as CIS’ Kausha Luna points out, “for those who fraudulently attain a Honduran passport, how many successfully acquire a U.S. visa?”

"A document breach, such as the one in the Honduran RNP, presents yet another obstacle to the United States' ability to properly vet individuals,” Luna concludes.