Faced With Monday Decision on Bathroom Law, NC Gov Says Obama Admin Is Being a 'Bully' 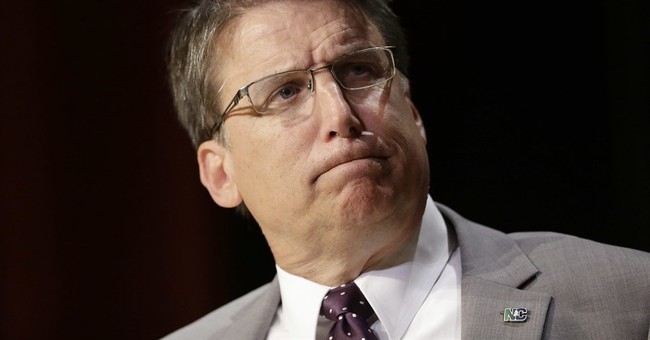 The Obama administration last week notified North Carolina that its controversial bathroom law violates the Civil Rights Act and that the state would have until close of business on Monday to “remedy the situation.”

Governor Pat McCrory told Fox News on Sunday that he would make a decision by the Monday deadline, but would not reveal what exactly that meant—only going as far as to say he’s exploring “all legal options.”

One option would likely be a court challenge.

The state law requires transgender people to use bathrooms that correspond with the sex on their birth certificate. The Justice Department says that's against the federal law.

McCrory says the North Carolina law applies only to government offices, universities and road-side rest stops, not every bathroom in the state.

The administration’s warning, he said, means the issue isn’t just about North Carolina anymore, but would impact any state that accepts federal funding for universities.

"This is no longer just a North Carolina issue," he said. "This is a basic change of norms that we've used for decades throughout the United States of America and the Obama administration is now trying to change that norm.”

North Carolina could lose a lot of federal money if it fails to comply with the Justice Department -- potentially hundreds of millions of dollars for its universities alone.

The Justice Department also sent a letter to the University of North Carolina Board of Governors telling them that new law was in violation of federal law. They were given the same Monday deadline.

McCrory said Sunday that this action sets a precedent, with the federal government "now telling every university that accepts federal funding that boys who may think they're a girl can go into a girl's locker room or restroom or shower facility, and that begins I assume tomorrow."

McCrory argued that the time frame the government has given North Carolina is unrealistic.

“I don’t think that three working days is enough time for such a pretty big threat,” he said. "It’s the federal government being a bully, making law.”