Hannity Blows Up At Cruz Over Delegates: 'I'm Getting Sick of It' 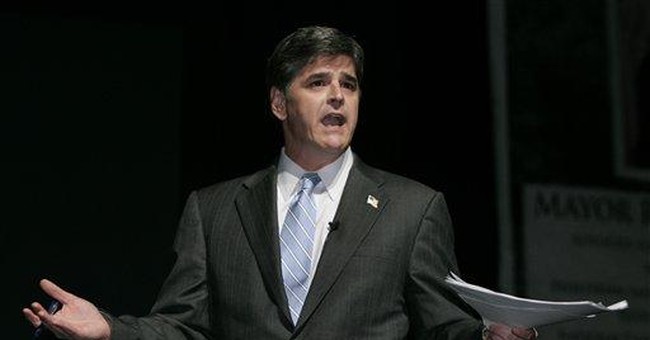 Sean Hannity and Ted Cruz went at it in a testy interview on Tuesday when the Fox News host asked the Texas senator about his campaign’s delegate selection operation.

Hannity started out by telling his audience that Cruz hopes to get to a second ballot so supporters of other candidates could have the opportunity to switch their votes.

“So you’re in a process of talking to delegates, and it seems to be very extensive. Could you explain to people what’s going on?”

“Sean, with all respect, that’s not what people are concerned about,” Cruz responded, noting that the American people care more about jobs, wages, and beating Hillary Clinton in the general election.

Hannity insisted it was a serious question, and that the “millions of people” he engages with through his Fox News show, on radio and social media want to know.

“I’m asking you more than a process question, it’s an integrity of the election question, and everybody is asking me this question,” he said.

“Sean, the only people asking this question are the hardcore Donald Trump supporters,” Cruz shot back.

“Why do you do this every single time” Hannity began. “You gotta stop! Every time I have you on the air, and I ask a legitimate question, you try to throw this in my face. I’m getting sick of it. I’ve had you on more than any other candidate on radio and TV. So if I ask you, senator, a legitimate question to explain to the audience, why don’t you just answer it?”

“Sean, can I answer your question without being interrupted?” Cruz calmly responded, before giving the host the full rundown of what’s happened in the election so far.

“In the last three weeks there have been five elections in five states: Utah, North Dakota, Wisconsin, Colorado and Wyoming. We’ve won all five. Over 1.3 million people voted in those five states. We won all five. All of this noise and complaining and whining has come from the Trump campaign because they don’t like the fact that they’ve lost five elections in a row, that Republicans are uniting behind our campaign,” he said. “So they’re screaming on Drudge and it’s getting echoed, this notion of voterless elections. It is nonsense. They are making it up.”

Cruz added that delegates are elected by the people, but Trump’s campaign doesn’t know how to organize. Cruz suggested the Republican presidential front-runner’s campaign passed out fliers asking supporters to vote for a list of delegates that included the Texas senator’s delegates and fired off an emergency email to Washington, D.C., supporters that were intended for supporters in Washington state days ahead of the state convention.

“I cannot help that the Donald Trump campaign is incapable of running a lemonade stand,” Cruz said. “My focus is on jobs, freedom and security, not this incessant whining from the other side. If you lose, don’t cry about it. Go back and learn how to win an election.”

The fiery exchange continues, with Hannity wondering why Cruz seems to be getting so mad, and Cruz insisting he’s not, but wants to focus on the issues rather than “nonsense” from the Trump campaign.

Check it out below: