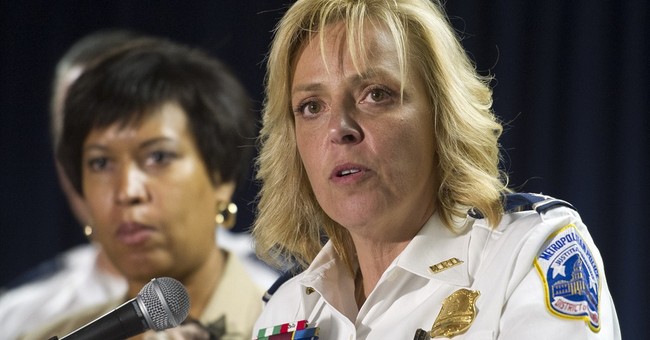 What should D.C. residents do if confronted with an active shooter situation? According to police chief Chief Cathy L. Lanier, the “best option for saving lives before police can get there” would be for citizens to try to subdue, or even kill, the gunman.

Lanier was asked during a CBS “60 Minutes” interview how people should respond to being near an active gunman, like what happened in Paris earlier this month.

“Your options are run, hide, or fight,” she said. “If you’re in a position to try and take the gunman down, to take the gunman out, it’s the best option for saving lives before police can get there.”

To anyone paying the slightest attention to the fight over gun laws in the District, Lanier’s statement is curious, given that she’s been an outspoken proponent of gun control in D.C., which already has some of the strictest gun laws in the country.

The District for decades had outlawed handguns until the U.S. Supreme Court overturned the ban in 2008. Since then, city leaders have enacted restrictive laws that are still being challenged in court by gun owners and pro-gun activists.

City regulations allow only those who can demonstrate a “good reason” to need to carry a handgun to be eligible for a concealed-carry permit. Statistics provided by the Metropolitan Police Department indicate that as of Nov. 14, the department has approved 48 permits out of 298 applications. Another 185 have been denied, and the remainder are pending.

“This is sound advice,” said Alan Gottlieb, chairman of the Citizens Committee for the Right to Keep and Bear Arms, reports The Washington Times. “But considering the draconian gun laws in the District, it will remain difficult, if not impossible, for most private citizens to do what the chief is suggesting.”

“We only hope that this means she will begin to issue concealed-carry permits to law-abiding citizens so they won’t have to ‘take out’ armed terrorists with their bare hands,” said NRA spokeswoman Jennifer Baker.