EU Data Shows 80 Percent of Migrants Are Not From Syria 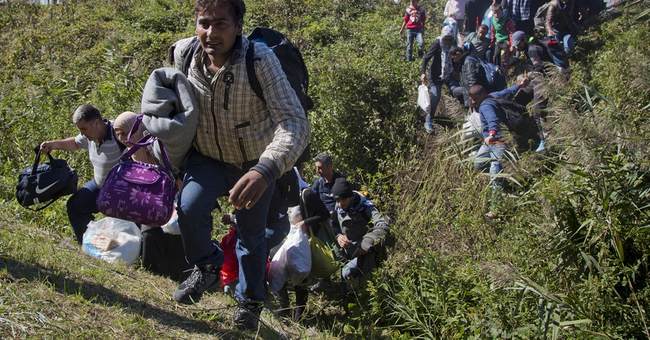 Just as the British government is being pressured to take in more refugees, new data confirms that the vast majority of migrants coming into Europe are not fleeing the Syrian civil war; rather, they are economic migrants just looking for better opportunities.

Of the 213,000 people who arrived between April and June, only 44,000 were fleeing war-torn Syria, or, one out of every five migrants.

Campaigners and left-wing MPs have suggested the vast majority of migrants are from the war-torn state, accusing the Government of doing too little to help them.

'This exposes the lie peddled in some quarters that vast numbers of those reaching Europe are from Syria,' said David Davies, Tory MP for Monmouth. 'Most people who are escaping the war will go to camps in Lebanon or Jordan.

'Many of those who have opted to risk their lives to come to Europe have done so for economic reasons.'

Sir Bill Cash, a fellow Tory, said: 'These figures make extremely disturbing reading. The whole argument has been made that this influx is all real refugees from Syria whereas this adds to the substantial evidence that there are a large number of economic migrants who are aiming for a better life.'

British Prime Minister David Cameron said the UK will take up to 20,000 Syrian refugees from the camps on the country’s border over a five-year period.

“It is absolutely right that Britain should fulfill its moral responsibility to help those refugees just as we have done so proudly throughout our history,” he said. “But in doing so we must use our head and our heart by pursuing a comprehensive approach that tackles the causes of the problem as well as the consequences.”

Britain’s strategy to help would most certainly not include taking in migrants who are already in Europe, however. Doing so, he said, would only encourage more migrants to come.

“Claiming asylum must not be viewed as an easy means of settlement by those who are not actually refugees,” a spokesperson at the UK’s Home Office told The Daily Mail.

“That is why the UK is focused on resettling genuine Syrian refugees directly from the region. This will ensure we are taking in the most vulnerable people and deter people from attempting the perilously journeys which have already led to so many tragic deaths.”