A Voice for the Victims 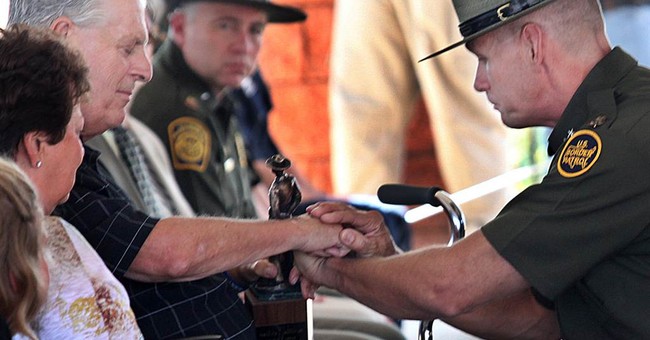 “While your Executive Order pad is out, can you write one to bring my son and the tens of thousands (actually over 100,000) killed by illegal aliens back to life and to bring our destroyed families back together?” Don Rosenberg, whose son, Drew, was run over by an illegal immigrant in 2010, wrote in a letter to President Obama just days before he announced his executive amnesty.

Drew's death, like the thousands of others that came before and after, was entirely preventable had our nation’s leaders enforced the immigration laws already on the books.

It was tragedies like these that Maria Espinoza couldn’t ignore, prompting her to start The Remembrance Project in 2009 as a way to honor and remember the Americans who’ve been killed by illegal immigrants.

“It’s not what I really signed up to do,” Espinoza told Townhall. “I would much rather be at home and go for a nice jog in the morning, relaxing and not thinking that our public servants are traitors … but once you pull that curtain back, you cannot turn away.”

Today, the group is standing up for American families, U.S. laws and customs, and the Constitution through educational efforts, awareness projects, and outreach.

“I just think it’s wrong for public servants and our government to ignore laws and to place non-citizens before citizens,” she said.

And through its Stolen Lives Quilt initiative, the organization gets to show Americans across the nation that illegal immigration is not a victimless crime.

This year, Espinoza’s group has been to Oregon, Washington, Idaho, New Mexico, Iowa, Massachusetts, and Colorado to meet with concerned citizens and bring attention to the Americans who’ve been killed by illegal aliens.

“The Stolen Lives Quilt serves as connecting the dots for average American families,” she said. “ Basically, were trying to do the job the mainstream media is not doing and making the public aware of what is taking place because laws are not upheld.”

The visual memorial helps get the point across to people all over the U.S. that every state has in fact become a border state.

“It’s not just Texas, California, New Mexico, or Arizona that are having these problems,” she explained, “it’s in their communities and the quilt makes that connection.”

Espinoza isn’t just talking to everyday Americans, however. Earlier this year she had the opportunity to speak with the Secretary of Homeland Security Jeh Johnson and Attorney General Eric Holder. But as you might expect, the meeting, also attended by Bryan Terry’s family, “didn’t go very well.”

After reading a letter on behalf of the families of the victims, Johnson’s comment to her was that he was “not [there] to be interrogated.”

“When a public servant has a specific duty and he’s not doing it and a concerned citizen asks him on behalf of tragic stricken families why are they not upholding current laws, that’s his response?” she said indignantly.

Despite the obstacles ahead, most notably President Obama’s executive amnesty, Espinoza says the group will not change its approach.

“We have right on our side, we believe in God, and we believe in this country and we place our families first and I think that is what the winning combination is, it’s very common sense, we’re not asking for a lot,” she said, adding that this is only the beginning—they’re not finished yet.

No they certainly aren’t. In addition to the Stolen Lives Quilt initiative, the group is petitioning the Obama administration on We The People for restitution to the families of victims killed by illegal immigrants. They need 100,000 signatures by December 2 to receive a response from the White House.

They’re also joining efforts with Massachusetts Sheriff Thomas Hodgson on December 10 at the U.S. Capitol to call on Congress to immediately act to secure our borders. According to Hodgson, this is the “first step in achieving legitimate immigration reform in the future.”

“We just want basic laws to be upheld so that we can protect our families,” she said. “We can’t afford to not be victorious because losing this battle means losing America.”