‘I Didn’t Join to Be Sacrificed’: US Troop Deaths in Afghanistan Skyrocket Under Obama 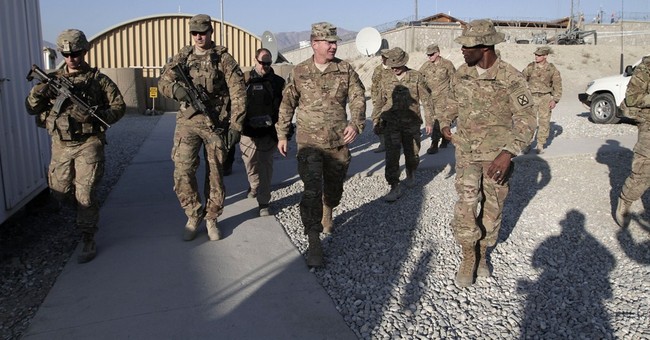 U.S. military deaths in Afghanistan have skyrocketed under President Obama. Since 2009, 73 percent of all U.S. deaths in the country have taken place, amounting to 27.1 fatalities per month, on average. Billy and Karen Vaughn, Gold Star parents of Special Operations Chief (SEAL) Aaron Vaughn who was killed in action in 2011, are speaking out about why.

U.S. soldiers in Afghanistan are now forced to fight a two-fronted war. Before each deployment, these soldiers understand fully that day after day they will do battle against relentless terrorists with shifting loyalties and unspeakable hatred. But what none of them could have foreseen was the killing field that would open from their rear: the Continental United States.

Our government’s incessant tightening of already restrictive ROE (Rules of Engagement), compounded by the failed COIN (Counterinsurgency) strategy—also known as “winning hearts and minds”—has made an otherwise primitive enemy formidable.

Our best and brightest come home in body bags as politicians and lawyers dine over white linen tablecloths; writing, modifying, and re-modifying these lethal rules. Rules that favor the enemy rather than the American soldier. Rules so absurd they’re difficult to believe until you hear the same stories over and again from those returning from battle.

Rep. Louie Gohmert has spoken out about the current ROE and COIN, which are so restrictive he doesn’t see the “merit in the potential further sacrifice and loss of American lives in Afghanistan.” This sentiment is echoed by some members of the military as well. The Vaughns continue (emphasis mine):

“In a delicate discussion with an Army Ranger who recently left the military, we heard the following: “I had to get out. I have a family who needs me. I didn’t join to be sacrificed. I joined to fight.””

Under the current ROE, U.S. troops cannot fire without first confirming that a Taliban fighter is armed, even if they are sure the target is the enemy.

And if they violate these rules, troops fear being court martialed, imprisoned, or kicked out of the service all together. “The last thing a warfighter should ever be forced to experience is unnecessary fear,” the Vaughns write. “Fear creates hesitation. Hesitation creates flag-draped caskets. Flag-draped caskets create fatherless children, widowed wives, and childless parents. Our heroes deserve the right to fight with swift hands, clear minds, and confident hearts.”

“To the American people an American military life is worth far more than the life of an Afghan soldier or civilian. For the current occupants of the White House and the Administration’s staff it seems to be just the opposite.”