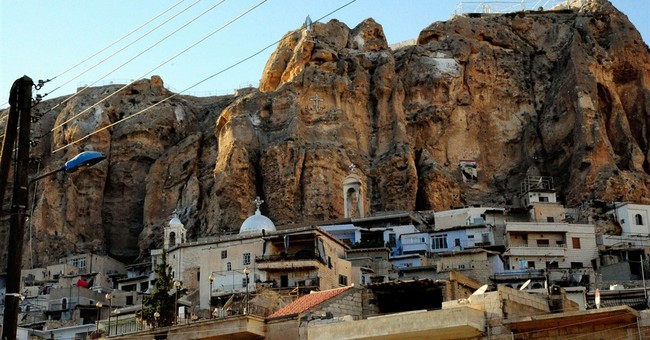 It’s been two and a half months since the Obama administration backed off its threat to strike Syria, and in that time, the nation’s attention has moved onto other domestic and international matters, like Obamacare’s disastrous rollout and reining in Iran’s nuclear program. Although both are exceedingly important, we must not turn a blind eye to what’s going on in Syria, where peace remains elusive despite the Russian-brokered deal to rid the country of its chemical weapons. The latest news to come out of war-torn Syria is the abduction of 12 nuns from a predominately Christian village by Islamist rebels.

Islamist fighters who captured a Christian village north of Damascus have moved some nuns to a nearby town but it was not clear if they had been kidnapped or evacuated for their safety, the Vatican's ambassador to Syria said on Tuesday.

The militants took the ancient quarter of Maaloula on Monday after heavy fighting with President Bashar al-Assad's forces, activists said. Syrian state media said they were holding the nuns captive in the Greek Orthodox monastery of Mar Thecla.

Vatican envoy Mario Zenari said the 12 nuns had been taken from Maaloula to Yabroud, about 20 km (13 miles) to the north.

Zenari said the Greek Orthodox Patriarchate had told him armed men had entered the monastery on Monday afternoon.

"They forced the sisters to evacuate and to follow them towards Yabroud. At this moment we cannot say if this is a kidnapping or an evacuation," he told Reuters by telephone from Damascus. "I heard now there is a very fierce conflict going on in Maaloula."

The fighting, which pits al Qaeda-linked Nusra Front fighters and other rebels against Assad's forces, is part of a wider struggle for control of the Damascus-Homs highway in central Syria.

The Maaloula convent’s mother superior, Pelagia Sayyaf, was able to call the head of a nearby convent to say they were all “fine and safe.” Nevertheless, Syria’s Greek Orthodox Patriarch John Yazigi called on the rebels to release the nuns.

“We appeal to the seed of conscience that God planted in all humans, including the kidnappers, to release our sisters safely,” Yazigi said in a statement issued Tuesday.

“We call upon the international community and world governments to ... release the nuns of Mar Takla Convent and the orphans who are being held since yesterday,” he added.

On Monday, Christians held a service in Damascus protesting the capture of the nuns and the kidnapping of two bishops near Aleppo in April, according to Syrian state television.