Justice Ginsburg: I Have No Plans to Retire 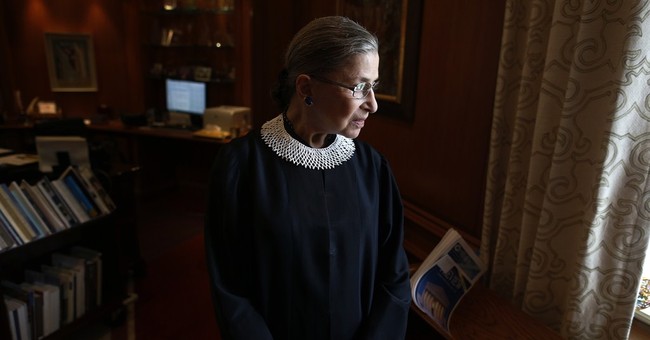 Despite her age and two run-ins with cancer, Justice Ginsberg recently told The New York Times that she has no plans to retire any time soon. Ginsburg said she’s going to stay “as long as [she] can do the job full steam.”

Many on the Left are hoping to see Ginsburg retire before Obama leaves office to ensure that she would be replaced with a liberal voice, but given her recent statement, that remains to be seen.

Ginsburg in the interview also described the court as “one of the most activist courts in history” and suggested she’s staying to ‘try to turn back that tone,’ according to The Washington Times. But this is a rather unusual assessment for her to make considering that many believe her to be guilty of judicial activism:

In 2010, Justice Ginsburg gave a speech before a crowd at the International Academy of Comparative Law at American University, where she called for U.S. courts to turn to foreign and international laws to help interpret the Constitution.

Then, she argued that “from the birth of the United States as a nation, foreign and international law influenced legal reasoning and judicial decision making. Founding Fathers, most notably, Alexander Hamilton and John Adams, were familiar with leading international law treatises, the law merchant and English constitutional law. And they used that learning as advocates in legal contests,” Opinio Juris reported.

NRO also takes issue with Ginsberg’s definition of judicial activism, which she said is “measured in terms of readiness to overturn legislation.”

“[Judicial activism] can’t be boiled down to overturning legislation, but instead happens when judges employ novel and expansive readings of the law to reach a preferred policy outcome. But even under the liberal redefinition of judicial activism, Justice Ginsburg’s claim is still misleading. Jonathan Adler reviewed the evidence for this charge last year, and concluded it is a myth: “If by ‘judicial activism’ one means a willingness to overturn precedents and invalidate federal laws, the Roberts Court is the least activist court of the post-war period.”