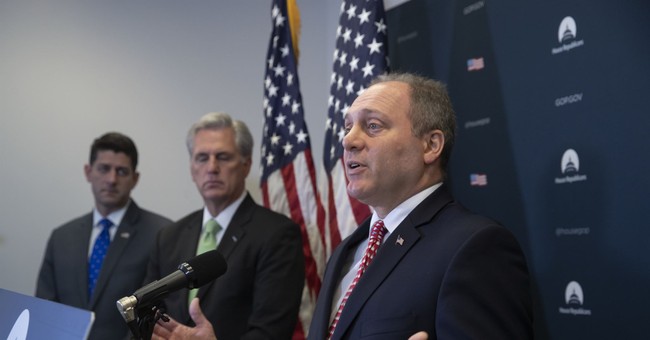 Following a meeting between the president and GOP leadership, he said that the president is sticking to his $5 billion demand for border wall funding.

He said the crisis at the border is something “all Americans should be concerned about regardless of how you feel about immigration policy because at the end of the day we still have a legal way to come into this country and there are millions of people that are waiting and playing by the rules to do it the right way.”

The third-ranking House Republican also called for GOP lawmakers to get behind the president’s latest request for wall funding.

"The president has been very clear that he needs $5 billion to properly secure the border," he said. "We need to be there for him and make sure this gets signed."

Regarding the potential for a partial government shutdown over the funding, Scalise said it came down to whether Democrats and Republicans could reach an “agreement to keep America safe.”

“We’re going to have these negotiations and there’s a deadline. November 30 is the deadline. Democrats know that deadline as well, so they’ve got some decisions they’ll have to make,” he added.

Senate Minority Leader Chuck Schumer (D-NY) said earlier Tuesday Democrats were not willing to support more than $1.6 billion for border wall funding which was the amount the Senate initially passed in a Homeland Security bill, complying with the White House’s original request.

However, President Trump is saying that $5 billion in funding is now needed for the border wall.

"He said he would veto at $1.6 [billion], so I take him at his word,” Senate Appropriations Committee Chairman Richard Shelby (R-AL) said Tuesday of the president’s position on that proposal.