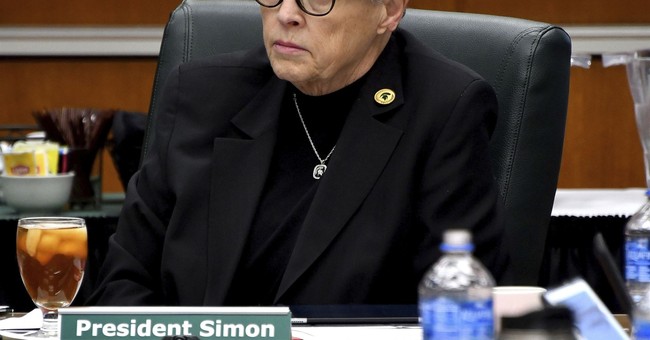 Former Michigan State University president Lou Anna Simon was charged Tuesday with lying to police during the investigation of former USA Gymnastics and MSU doctor Larry Nassar who sexually abused hundreds of young gymnasts under the guise of medical treatment. She is now the third person to be charged by the Michigan Attorney General’s Office in its investigation of MSU’s handling of the Nassar scandal.

According to the court documents obtained by the Lansing State Journal, Simon falsely claimed "that she was not aware of the nature of the complaint that" prompted a 2014 Title IX investigation into Nassar by MSU.

"When asked about whether she was aware of any investigation involving Larry Nassar prior to 2016 she falsely or misleadingly said that 'I was aware that in 2014 there was a sports medicine doc who was subject to a review' when in fact she knew it was Larry Nassar who was the subject of the 2014 MSU Title IX investigation,” according to the documents.

MSU’s 2014 Title IX investigation was prompted by a complaint of sexual assault from MSU graduate Amanda Thomashow. That investigation cleared Nassar of policy violations and concluded his behavior was “medically appropriate” by citing the opinions of three medical specialists and an athletic trainer all with ties to Nassar.

Nassar was suspended from clinical duties during the Title IX investigation. However, he was allowed to continue treating patients at MSU until 2016.

Nassar is serving a federal prison sentence and has also been sentenced to up to hundreds of years in state prison after hundreds of women and girls delivered victim impact statements about his abuse. Olympic gymnasts Simone Biles, Gabby Douglas, and McKayla Maroney were among those who said Nassar molested them.