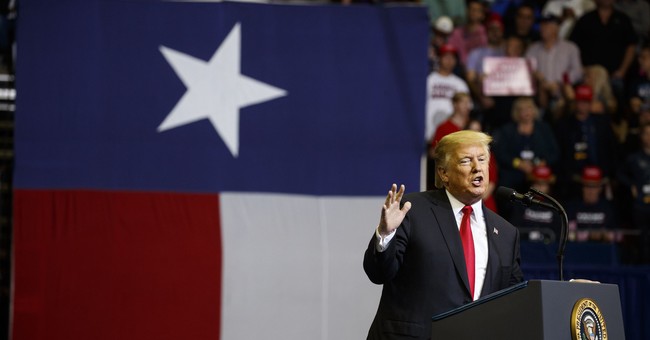 Rep. Gregory Meeks (D-NY) compared President Trump calling himself a “nationalist” at a rally in Texas to the rhetoric of Adolf Hitler.

On CNN Tuesday, Rep. Meeks told Wolf Blitzer that his “first reaction” to Trump’s comment was that the word that “is a synonym to a nationalist is a chauvinist, and that apparently is what this president is.”

“It reminds me of the kinds of words that came from people like Hitler, who thought that in Germany he was a nationalist, and the kinds of people that this president seems to like, and those who are repressive dictators, those are the individuals that generally use that kind of phrase and those kinds of words,” he claimed.

Meeks went on to compare Trump to dictators who, he claimed, used similar language.

Blitzer replied by asking Meeks to explain his comparison to Hitler more arguing that such a comparison was “controversial.”

"What I'm saying is that using the word of nationalism and a nationalist, meaning that when you looked into Hitler, he was talking about Germany for the Germans and that's it, and anyone else was against them,” Meeks replied.”And so it seems as though this president is saying that it is only about Americans, and Americans above anything and everyone else. And that is a dangerous precedent."

Blitzer pressed Meeks asking if he saw parallels between Trump's rhetoric and Hitler’s actions in the 1930s.

Meeks clarified that he was comparing Trump’s comment to Hitler’s rhetoric, not his actions.

“What Hitler was saying about nationalism,” he said, “those socialist heads of states back then, what he was saying, what was able to gear the people up so that they could do what they did and how they led was using language like that. That’s how they built themselves up to be the dictators that they were.”

“I’m saying that that language that the president is utilizing is a very dangerous language that we must be very cautious about,” Meeks concluded.

Trump doubled down on his use of the term Tuesday telling reporters, “I am absolutely a nationalist.”

“I love our country,” he said, arguing that “our country has taken second fiddle.”

Trump said that this was particularly the case when it came to trade deals.

“If you look at the trade deals, and nobody knows it better than me. I'm knocking out some of the worst deals I've ever seen,” he said. “When we're giving all of our wealth, all of our money, to other countries, and then they don't treat us properly, where we're protecting other rich countries.”