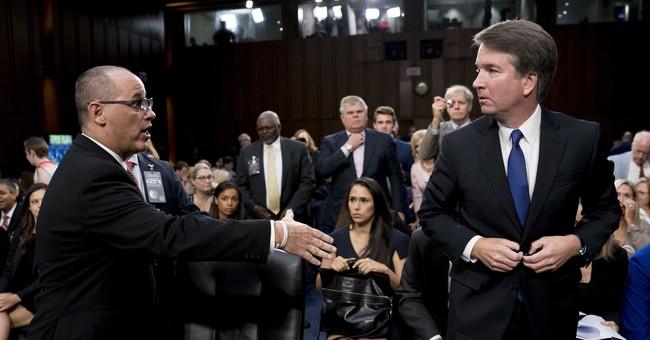 White House Deputy Press Secretary Raj Shah responded Tuesday to a tweet from the father of a Parkland shooting victim, Fred Guttenberg, who said that Judge Kavanaugh “turned his back” to him and likely “didn’t want to discuss gun violence.” Guttenberg's attempt to speak with Kavanaugh was also captured in an Associated Press photograph.

Some in the media, gun control groups, and Parkland student activists were upset by the interaction and initial photo, claiming that Kavanaugh was intentionally ignoring Guttenberg.

Most pictures are worth a thousand words...

The NRA has spent millions of dollars to appoint Kavanaugh it's going to take 1000s of phone calls to stop this man. pic.twitter.com/R2h65VQs4k

Fred Guttenberg, the father of Jamie Guttenberg who was killed in the shooting in Parkland, Fla., left, tries to shake hands with @realDonaldTrump's Supreme Court nom., Brett Kavanaugh, right, during a lunch break. Kavanaugh did not shake his hand. (AP Photo/Andrew Harnik) @ap pic.twitter.com/smcCGuLT6X

Please let this be
a misunderstanding
a miscommunication
a mistake
Politics & policy aside, decency must prevail

It was a taxing, chaotic & stressful day.
Let’s hope this was just a mixup.#decencyfirst https://t.co/HPD2AMWG93

The image that may come to define the first day of the Kavanaugh hearings. https://t.co/gkVyvUMxIu

I know "wow" tweets are dumb and cliched but this photo of @fred_guttenberg is....a wow photo https://t.co/MrOmMqluD7

Democrats have reportedly begun to fundraise off of the moment.

Democrats already running FB ads on the Guttenberg-Kavanaugh moment. Am told there will be Instagram and Twitter ads too pic.twitter.com/0u6wjGyAeS