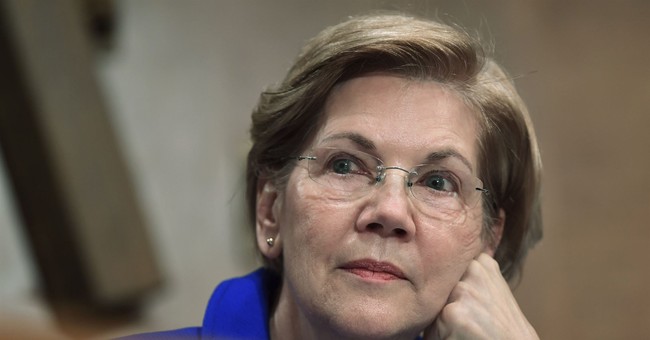 Sen. Elizabeth Warren (D-MA) responded to a question Tuesday at the National Press Club about Democratic Socialist Alexandria Ocasio-Cortez's decision to exclude the press from some of her town halls.

"Just last week we saw Alexandria Ocasio-Cortez explicitly exclude journalists from two of her town halls that were open to the public so I'm interested in your comments on that action by her specifically, but more generally a movement to potentially exclude press from open events," the interviewer asked at the event.

Warren did not directly address Ocasio-Cortez’s decision, but replied by discussing specifically her policy when it comes to the press.

"I have had press at my events for a long time," Warren emphasized. "I just finished my 34th town hall and so far as I know, we had press at every single one of them. And we did availability afterwards, so anyone could come up from the press specifically and as their own questions and get it live on tape. I think that's the best way to run a democracy."

Despite her words about the importance of press availability, Sen. Warren is frequently criticized for her own  longstanding policy of not taking questions from the press in the Senate hallways.

Ocasio-Cortez defeated fourth-ranking House Democrat Joe Crowley of New York in a June primary and Warren has supported much of the 28-year-old’s agenda, including calls to abolish ICE and making similar, inaccurate claims about unemployment numbers.

Ocasio-Cortez replied to some of the criticism of her press bans Sunday by saying she was trying to make the events a "sanctuary space," arguing that "people were much more comfortable sharing their personal issues with healthcare, housing, and immigration. It was a safe + powerful environment for change."

Her campaign told The Washington Post Friday that they will not be banning press at future events.

Catching up on how this became a thing while I was gone.

Biggest critique is it should‘ve been labeled “private,” even though we’d said prior it was closed to press.

Genuine Q?: how should we label a free campaign event, open to all, that’s a sanctuary space? Still private? https://t.co/0TO7qOk09h

To be honest, the event was very successful.

People were much more comfortable sharing their personal issues with healthcare, housing, and immigration. It was a safe + powerful environment for change.

My apologies if the situation upset or alarmed journalists or constituents.