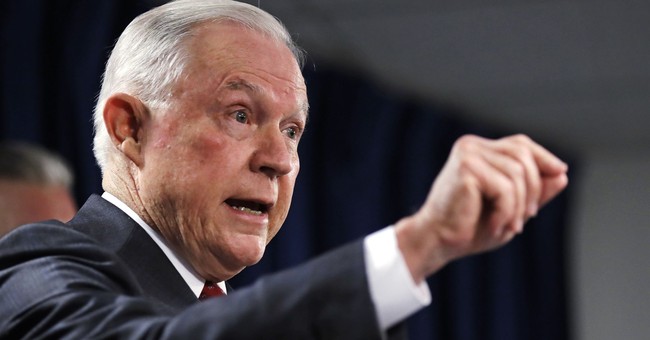 Attorney General Jeff Sessions clarified at an event in Boston Thursday that perhaps he should’ve responded a bit differently to the chant of “Lock her up” at the Turning Point USA High School Leadership Summit earlier this week.

A reporter asked Sessions about the fact that he had repeated the phrase and laughed it off.

AG Sessions on echoing a "lock her up!" chant earlier this week: "I perhaps should have taken a moment to advise them that ... you're presumed innocent until cases are made." pic.twitter.com/lR7FNszGeg

"I met with a group of enthusiastic high school students and they spontaneously broke into that chant. I perhaps should've taken a moment to advise them of the fact," Sessions said. "You're presumed innocent until a case is made.”

“It was a great event to be with those kids, and that would be my answer to you on that,” he added.

The “Lock her up” chant in reference to Hillary Clinton became popular at 2016 presidential election campaign events and is still used by crowds at conservative rallies.

When the high schoolers chanted the phrase, Sessions repeated “Lock her up,” commenting, "I heard that a long time over the last campaign."

However, many in the media characterized his comment on the chant as “joining” the chant.

Jeff Sessions joined in during a “Lock her up!” chant while giving a speech to a group of conservative high school students on Tuesday.

It's the latest example of Trump and his aides making aggressive gestures toward their political rivals https://t.co/llHYnVwuST pic.twitter.com/FQEjKWkEco

Beyond the top law enforcement officer of US chanting to lock up a (never charged) political rival of the President, why now?
He had ample opportunity on the 2016 trail. https://t.co/lHwZKokc8k