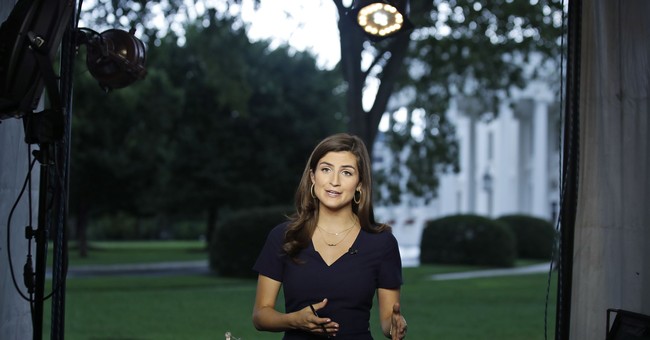 “At the conclusion of a press event in the Oval Office a reporter shouted questions and refused to leave despite repeatedly being asked to do so,” Sanders said. “Subsequently, our staff informed her she was not welcome to participate in the next event, but made clear that any other journalist from her network could attend.”

Sanders said Kaitlan Collins had told the White House she did not plan to attend the Rose Garden event anyway.

"To be clear, we support a free press and ask that everyone be respectful of the presidency and guests at the White House," Sanders added.

The White House banned CNN reporter Kaitlan Collins from a Rose Garden event that was open to the press Wednesday afternoon.

Collins was serving as the pool reporter that day, a role that reporters from major networks take turns doing, during a meeting between Trump and Jean-Claude Juncker, the president of the European Commission. She shouted some questions along with other members of the press following the photo-op.

She also repeatedly asked, "Why is Vladimir Putin not accepting your invitation, Mr. President?"

Trump did not respond and said, "Thank you very much, everybody" to the press pool.

Later that day, the White House announced a last-minute press availability with Trump and Juncker in the Rose Garden that was open to all the press.

CNN reports that “a few minutes later, Collins was asked to come to Bill Shine's office. Shine, a former co-president of Fox News, is the new deputy chief of staff for communications. Shine and press secretary Sarah Sanders met Collins there.”

"They said 'You are dis-invited from the press availability in the Rose Garden today,'" Collins said. "They said that the questions I asked were inappropriate for that venue. And they said I was shouting."

"Just because the White House is uncomfortable with a question regarding the news of day doesn't mean the question isn't relevant and shouldn't be asked," CNN said in a statement. "This decision to bar a member of the press is retaliatory in nature and not indicative of an open and free press. We demand better."

The White House Correspondents' Association and many prominent media figures condemned the move.

As a member of the White House Press pool- @FoxNews stands firmly with @CNN on this issue and the issue of access https://t.co/TFwfLQtP9h

Absolutely disgraceful behavior from @presssec and Shine. @kaitlancollins is a tough professional and had every right to ask about Cohen, about whom POTUS has repeatedly tweeted. WH press corps and media writ large needs to unite against this. https://t.co/ryg3Uj8qvG

As today's radio pooler, I was in the Oval Office with @kaitlancollins, heard her questions, thought they were good and timely ones, and find an official government sanction in response to them an absolute, stunning outrage.