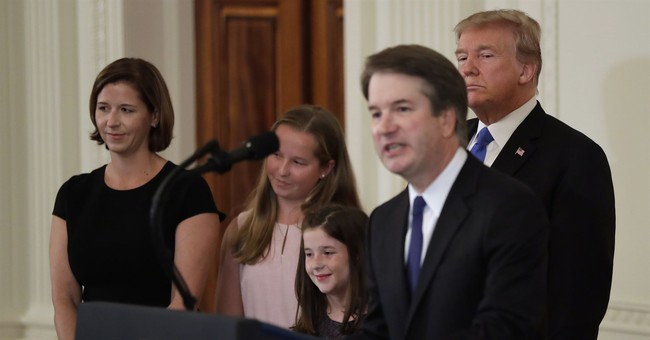 “Judge Kavanaugh is a home run,” Carrie Severino, the group’s chief counsel and policy director said in a statement. “Like Gorsuch, Judge Kavanaugh is brilliant, fair and independent, committed to following the law and honoring the Constitution. I look forward to the confirmation of another great justice.”

The ad touts Kavanaugh's excellent record at Yale Law school, his Bush-era White House career, and his bipartisan confirmation as a federal judge. The video compares him to Justice Gorsuch saying he applies the Constitution "just as it was written."

The ad campaign will appear in the states of four red-state Democrats in West Virginia, Indiana, North Dakota and Alabama.

Sens. Joe Manchin (D-WV), Joe Donnelly (D-IN) and Heidi Heitkamp (D-ND) are up for re-election in these states which Trump won in 2016. All three voted to confirm Gorsuch's nomination to the Supreme Court.

These three Democrats declined an invite to the White House Monday evening when Trump announced Kavanaugh as his nominee.

Judicial Crisis Network has also spent a good amount in past Supreme Court nominations, announcing they would spend up to $7 million to stop Merrick Garland, President Obama’s pick to replace the late Justice Scalia. They pledged up to $10 million to support now-Justice Gorsuch.