Netanyahu Shuts Down CBS When They Ask If He'd Talk to Hamas: Would You Meet With Al-Qaeda? 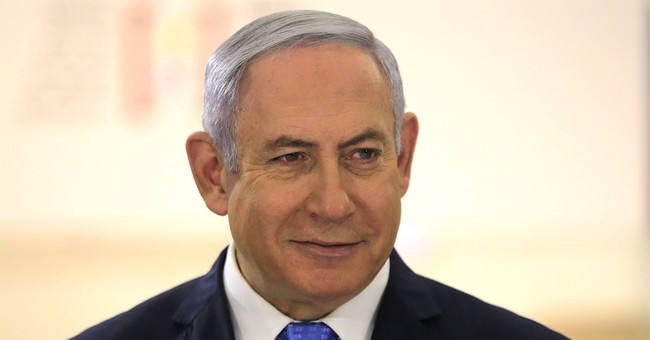 Israeli Prime Minister Benjamin Netanyahu had a question of his own for CBS anchor Jeff Glor Tuesday when Glor asked if Netanyahu saw himself “under any circumstance talking to Hamas?"

"As long as they seek our destruction, what am I going to talk about?" Netanyahu replied. "Could you talk to al Qaeda? Would you have discussions with bin Laden? About what?"

“I ask only because, against all odds, the U.S. and North Korea seem to be on the verge of meeting,” Glor responded, “so sometimes meetings that seem unimaginable end up happening.”

Netanyahu agreed that such meetings are possible but explained that leaders have to abandon the goal of annihilating the other side for this to work.

“You're right,” he said. “It's happened to us with our Arab neighbors, but that's when you have leaders who decided that they abandoned the goal of war and destruction and annihilating the other side.”

Netanyahu emphasized that he sees the possibility of peace with Palestinians, but only those that do not share Hamas’s goal of Israel’s destruction.

Netanyahu blamed Hamas for the high casualty counts at the riots that occurred on the border on the day of the U.S. embassy opening in Jerusalem

“They're pushing civilians, women, children into the line of fire with the view of getting casualties,” he said. “We try to minimize casualties. They're trying to incur casualties in order to put pressure on Israel, which is horrible.”

“Did your army go too far?” Glor pressed at one point regarding the casualties from the violence at the border.

“I don't know if any army would do anything differently if you had to protect your border against people who say, ‘we're going to destroy you and we're going to flood into your country,’” Netanyahu replied.