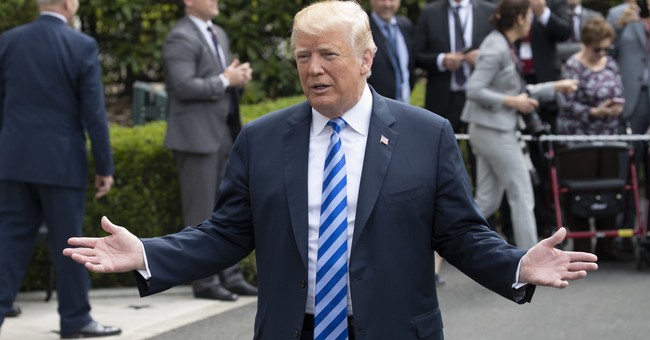 President Trump told reporters Friday that the White House is not “changing any stories” on the $130,000 payment Trump’s personal lawyer Michael Cohen made to Stormy Daniels when pressed about whether he had changed his story regarding his knowledge of the payments.

"We're not changing any stories,” Trump said prior to boarding Air Force One. “All I’m telling you that this country is right now running so smooth and to be bringing up that kind of crap and bringing up witch hunts all the time. That’s all you want to talk about."

Trump was just asked about Stormy Daniels: “This country is right now, is running so smooth and to be bringing up that type of crap…” https://t.co/3tCqIk4rhz

Trump also told the press that "Rudy knows it's a witch hunt," and "he started yesterday. He'll get his facts straight. He's a great guy."

Rudy Giuliani revealed earlier this week that Trump had reimbursed his personal lawyer Michael Cohen $130,000 for a payment to Daniels.

Giuliani told NBC Thursday that he only shared details of the payment with Trump about a week ago.

“I don't think the president realized he paid him (Cohen) back for that specific thing until we (his legal team) made him aware of the paperwork,” he explained.

He says the president was in favor of going public about the reimbursement.

"You're not going to see daylight between the president and me," he said. "We're going to work hard to have a consistent strategy."