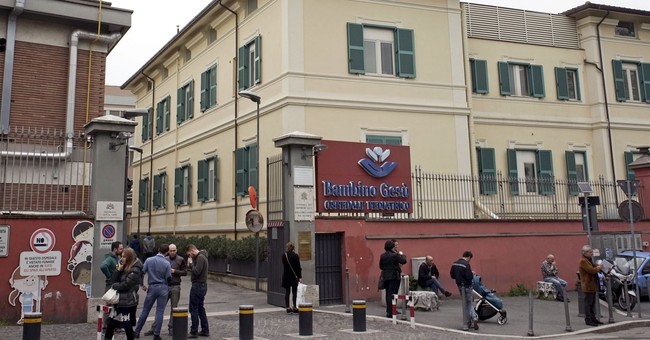 Alfie Evans, a 23-month-old, with an unknown degenerative neurological condition, is at the center of a legal battle as his parents are trying to appeal a court decision allowing the Alder Hey Hospital to take him off life support. His parents, Tom Evans and Kate James, want to take Alfie to Rome so he can remain on life support where a neurologist can assess his condition, seeking new diagnoses and treatment options.

Protestors have gathered outside the Liverpool hospital in support of the parents as an appeals court hearing was scheduled for Monday. Alfie will continue to receive treatment pending that hearing.

According to the Guardian, “the protest outside Alder Hey began after Tom Evans said in an emotional Facebook video that he had an air ambulance on standby to fly his son for treatment in Rome but that police prevented him from taking Alfie out of the hospital.”

It is my sincere hope that everything necessary may be done in order to continue compassionately accompanying little Alfie Evans, and that the deep suffering of his parents may be heard. I am praying for Alfie, for his family and for all who are involved.

Alfie's parents say they have seen him improve and grow and they will continue to fight the hospital as long as they think their son has a chance.

However, the hospital believes that in Alfie's case "all treatable conditions have been diagnosed. All the experts agree that it will not assist Alfie to subject him to further tests in order to identify a diagnosis."

According to BBC, the parents say that once the hospital removes ventilation from Alfie, they will fly him to Rome.

Alder Hey say they will not allow that, but Alfie’s father says they have no authority to prevent it.

"There's no court order to say Alfie has to stay in this hospital right now,” Tom Evans said.

"The truth behind the matter is that me and Kate hold full responsibility and we can take him to our transportation van with full equipment with the doctors who have got full duty of care,” he said, “and they are not allowing us so we are hoping that my solicitor is going to spin the spoon and get us out."

This legal battle is occurring less than a year after the Great Ormond Street Hospital in London took baby Charlie Gard off of life support after a similar struggle with his parents who wanted him to try an experimental treatment for his rare genetic condition.