Senators Complain about Lack of Amendment Votes and Debate in the Senate: 'It Sucks' 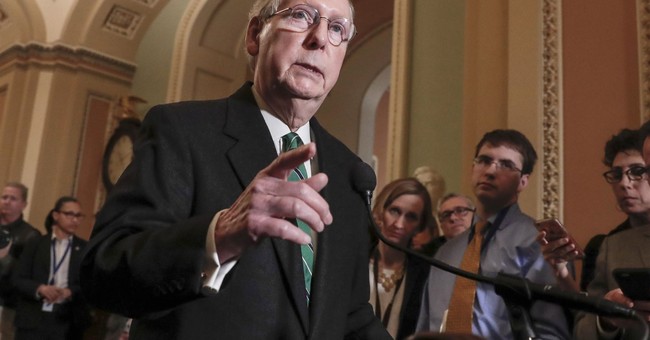 Senators on both sides of the aisle recently criticized the lack of amendment votes and debate in the Senate this year, and the lack of debate in general in the governing body. “I think it sucks,” Sen. John Kennedy (R-LA), who hasn’t gotten a roll call vote on even one of his legislative amendments, told Politico.

The Senate has voted on just six amendments so far this year.

“All I hear is, ‘Well, it’s not done that way,’” Kennedy said of trying to encourage more debate and amendments. “Well, the way we’ve been doing it for a long time sucks.”

“The body has taken just 25 roll call votes on so-called binding amendments so far during this two-year Congress,” Politico notes, “a sharp decrease from the 154 amendments voted on by this point during the 114th Congress under Barack Obama. Each year since McConnell took over, the Senate has voted on fewer nonbudget amendments: 140 in 2015, 57 in 2016, 19 in 2017 and six so far this year.”

When Senate Majority Leader Mitch McConnell (R-KY) took control of the Senate in 2014, he promised a more “free-wheeling” Senate with debate and amendments – something he has been unable to deliver in the current climate.

“A Senate majority under my leadership would break sharply from the practices of the Reid era in favor of a more free-wheeling approach to problem solving,” McConnell said in a 2014 speech. “I would work to restore (the Senate’s) traditional role as a place where good ideas are generated, debated and voted upon. We’d fire up the committee process. We’d work longer days and weeks, using the clock to force consensus.”

“In marked contrast to the Reid era,” he said at the time, “we would allow an open amendment process – ensuring senators on both sides a chance to weigh in on legislation and alleviating the frustration that inevitably results when they can’t.”

“There are times where I suspect the leader wants to be able to control,” Sen. Mike Rounds (R-SD) told Politico. “But there have been a number of times where he’s said we’re trying to do an open amendment process.”

Politico also notes that “there’s blame to go around on both sides: A truly open process requires the cooperation of all 100 senators; a single obstinate lawmaker can consume hours or days of floor time. And distrust is now so high among senators that some members won’t allow a vote on a colleague’s amendment unless they get one on theirs.”

McConnell says “he wants to get out of this [standoff] and feels stuck with it,” Sen. James Lankford (R-OK) commented.

Another thing taking up floor time is confirming nominees, which the Democrats have been delaying.

“One of the frustrating things is, in my efforts to get bills to the Senate floor, the answer is often: ‘We’ve got to get these confirmations complete,’” Sen. Jerry Moran (R-KS) told Politico.

“There’s a lot of weeks I’m not sure why I show up,” Sen. Chris Murphy (D-CT) said of the gridlock.

“What amendment process?” Sen. Catherine Cortez Masto (D-NV) asked. “I am being told by my colleagues that are senior here that this is not regular order. But it is becoming regular order.”