Melania Trump Responds to Critics of Her Anti-Cyberbullying Initiative 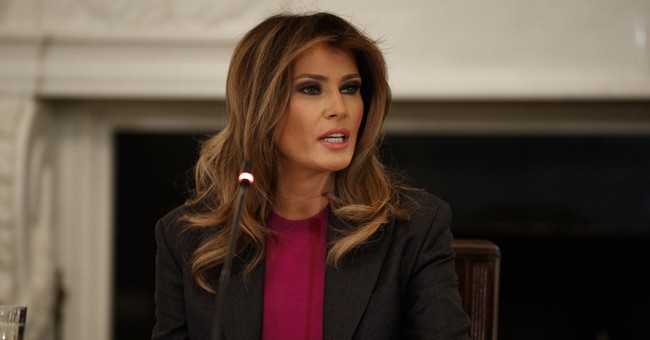 First Lady Melania Trump pushed back Tuesday against criticism she has faced over her initiative to fight cyberbullying at a meeting with social media executives to discuss the issue.

"I am well aware that people are skeptical of me discussing the topic,” she said. “I have been criticized for my commitment to tackling this issue, and I know that will continue, but it will not stop me from doing what I know is right.”

“I am here with one goal: helping children and our next generation," she emphasized.

WATCH Melania Trump responds to criticism of her cyber-bullying initiative:

"I'm well aware that people are skeptical of me discussing this topic ... but it will not stop me from doing what I know is right." pic.twitter.com/8PRV3KQt9z

The first lady is often criticized for her anti-cyber bullying initiative due to her husband’s behavior on Twitter which includes insulting his political enemies.

Trump told the panel of experts, gathered from entities such as Google, Facebook, and Twitter, that she has received messages from children who have dealt with social media threats.

"In my role as first lady, I receive many letters from children who have been bullied or feel threatened on social media,” she said. “I know that each of your companies and groups have been working on these issues for many years and I look forward to hearing what you have learned, what has been accomplished and what progress still needs to be made."

She said she believed that the companies “can make a real difference in encouraging positive behaviors on social media.”

Stephanie Grisham, communications director for the first lady, told CNN that Trump had chosen to speak candidly to the press before the discussion with the experts began.

"Yes, she knows there is going to be criticism, but she is an independent woman who is doing what she feels is right for children," Grisham said. "This should be celebrated, not criticized. It is our hope that people will be supportive of the goal to do all we can to help children grow up to be happy, healthy and morally responsible adults."