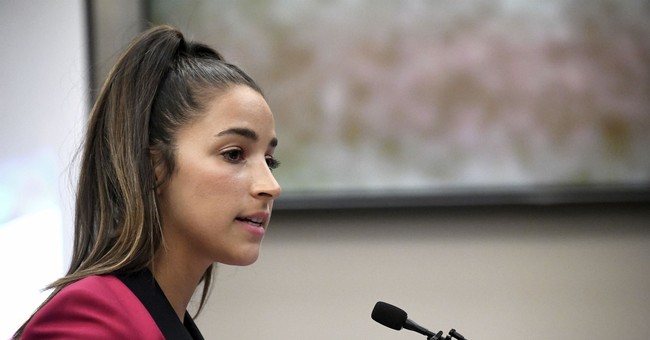 Olympic gold medalist Aly Raisman filed a lawsuit against the United States Olympic Committee and USA Gymnastics Friday, arguing that they knew or should have known about the sexual abuse former team doctor Larry Nassar was perpetrating against hundreds of girls under the guise of medical treatment.

"After all this time, they remain unwilling to conduct a full investigation, and without a solid understanding of how this happened, it is delusional to think sufficient changes can be implemented," Raisman said in a statement. "I refuse to wait any longer for these organizations to do the right thing. It is my hope that the legal process will hold them accountable and enable the change that is so desperately needed."

Nassar was sentenced to up to 175 years in prison after over 150 women delivered victim impact statements about the abuse during his trial. He pled guilty to 10 counts of criminal sexual misconduct. Olympic gymnasts Simone Biles, Gabby Douglas, and McKayla Maroney were among those who said Nassar molested them.

Raisman called attention to the negligence of USA Gymnastics and the Olympic Committee in her victim impact statement, pointing out that they ignored the allegations in August 2016 when they came to light and refused to investigate.

The lawsuit, obtained by Buzzfeed, now says that national team member, Maggie Nichols, told USA Gymnastics about Nassar’s abuse as far back as 2015, but they did not inform the FBI for over a month. They also did not inform Michigan State University, where Nassar was still practicing and abusing athletes.

The US Olympic Committee claimed it learned of the allegations against Nassar when the Indianapolis Star published a story in 2016, but reports show USA Gymnastics informed USOC as early as 2015.

Both organizations have apologized for their handling of the situation in recent months. The entire board of USA Gymnastics resigned in January after USOC demanded that they do so and USOC Chief Scott Blackmun resigned Wednesday.