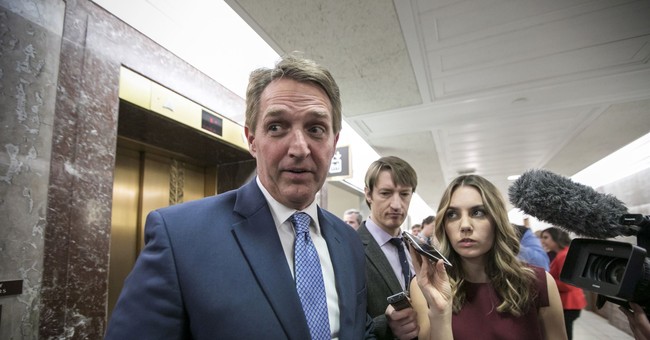 President Trump had an unlikely defender in Sen. Jeff Flake (R-AZ) after Trump said Wednesday “take the guns first, go through due process second" during a bipartisan meeting on school safety. Flake said Thursday that Trump “misspoke” but people needed to “move ahead.”

"A lot of times, by the time you go to court, it takes so long to go to court to get the due process procedures, I like taking the guns early. Like in this crazy man’s case that just took place in Florida," Trump said in the meeting. "To go to court would have taken a long time. So you could do exactly what you’re saying, but take the guns first, go through due process second."

" Most remarkable was his statement on due process, anything that we have introduced in the Congress respects due process, you got to do that,” Flake said. “So it was a bit astonishing to hear his language there and people around the table were kind of shaking their heads."

But Flake wants to move past the remarks, saying it was a simple instance of President Trump misspeaking.

"But you can chalk that up to, he misspoke, let's move ahead,” he said, “so I think there's a lot of excitement afterwards that he might actually lead on this and we need that."

"His leadership here is really critical if it's going to get through the House and Senate," Flake added.

The NRA was not thrilled with Trump’s remarks in the meeting, calling them “great TV” but “bad policy.”

President Trump tweeted Thursday that many ideas “some good & some not so good” had emerged from Wednesday’s meeting.